On the 10th anniversary of 2008 Mumbai attacks, the US Department of State’s Rewards for Justice(RFJ) expressed their solidarity to the people of India and the city of Mumbai. Six Americans – Ben Zion Chroman, Gavriel Holtzberg, Sandeep Jeswani, Alan Scherr, his daughter Naomi Scherr, and Aryeh Leibish Teitelbaum lost their lives in the terror attack

US president Donald Trump and US Secretary of State Mike Pompeo expressed their support to India in which Pakistan based terrorists went on a shooting rampage killing more than 160 people. Ten terrorists associated with the Lashkar-e-Taiba (LeT) carried out a series of coordinated assaults From November 26 to 29, 2008, against multiple targets in Mumbai.

On the ten-year anniversary of the Mumbai terror attack, the U.S. stands with the people of India in their quest for justice. The attack killed 166 innocents, including six Americans. We will never let terrorists win, or even come close to winning!

.@SecPompeo: On behalf of all Americans, I express my solidarity with the people of India and the city of Mumbai on the 10th anniversary of the #MumbaiTerrorAttack. We stand with the families and friends of the victims, including six American citizens. https://t.co/NGj4xSGkAv pic.twitter.com/F6oI1Rhouh

RFJ has announced the reward of $5 Million for any information or leads which would help arrest the individual who was directly or indirectly involved in the process of execution 26/11 attacks. The department strongly recommends Pakistan to implement UN sanctions against LeT.

The move comes less than a fortnight after US Vice President Mike Pence had a meeting with Prime Minister Narendra Modi in Singapore, during which he is believed to have himself raised this issue and rued that even 10 years after the Mumbai attack its perpetrators have not been brought to justice [2].

In accordance with section 219 of the Immigration and Nationality Act, the Department of State designated LeT as a Foreign Terrorist Organization (FTO) in December 2001. In May 2005, the United Nations (UN) 1267 Sanctions Committee added LeT to the Consolidated UN Security Council Sanctions List [3].

With this announcement, it will be the third time that RFJ initiated reward, in the hunt for information on the Mumbai attacks 2008. Earlier the US State Department had announced the reward in April 2012 which brought LeT founder Hafiz Mohammad Saeed and senior LeT leader Hafiz Abdul Rahman Makki to justice.

The state department said that the US is committed to working with international partners to identify and convict those responsible for the massive 26/11 terror attack in which 166 people lost their lives including six Americans.

The U.S. federal court indicted David Coleman Headley and Tahawwur Rana for supporting LeT in their terrorist operations. He was sentenced to prison for 35 years for all his criminal offences and for his role in planning terrorist attacks in Mumbai. He was also involved in a proposed attack in Denmark. In March 2012 he pleaded guilty for all the 12 offences against him.

Incepted in 1984, the rewards for justice program are administered by the US Department of state’s diplomatic security service. Since then the program has paid more than $150 million to over 100 people who have provided information that helped bring terrorists to the court of law or prevented acts of international terrorism worldwide.

[1] The US stands with India in their quest for justice

[2] The US announces 5 million rewards to 26/11 perpetrators

[3] The US calls upon Pakistan to implement sanctions 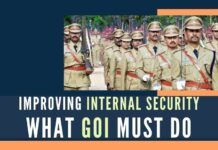