Home Politics US Politics US trade deficit soars to near-record $80.2 bn amid a surge in...
Facebook
Twitter
Telegram
WhatsApp

On the sidelines of pandemic, the US sees a trade deficit

The US trade deficit widened sharply to $80.2 billion in November 2021 as imports surged, the Commerce Department reported, amid the COVID-19 surge.

According to data released on Thursday, the gap in trade of goods and services expanded to $80.2 billion, from a revised $67.2 billion in October. The median estimate in a Bloomberg survey of economists was for an $81 billion shortfall. The figures aren’t adjusted for prices.

In a statement on Thursday, the Department said that US exports rose by 0.2 percent to $224.2 billion in November, while imports increased by 4.6 percent to $304.4 billion, reports Xinhua news agency.

The economy is still expected to grow steadily and has exceeded pre-pandemic levels, but it faces a fresh challenge from soaring Omicron cases in the U.S. and elsewhere. The virus could disrupt global trade again and set back efforts to clear up the congestion at West Coast ports.

The goods and services deficit rose by 19.4 percent from a revised $67.2 billion in the previous month, according to the Department.

“Strong imports continue to reflect the more robust recovery in the US, but are also a sign of incremental improvement in easing supply chain constraints,” Tim Quinlan and Shannon Seery, economists at Wells Fargo Securities, said on Thursday in an analysis, noting that imports of semiconductors rose by the most in eight months.

“The trade data have been particularly volatile in recent months, and November’s data suggest net exports will now be a drag on growth for the sixth consecutive quarter” in the fourth quarter of 2021, the economists said.

The US economy grew at an annual rate of 2.3 percent in the third quarter of 2021, lower than a pace of 6.7 percent in the previous quarter, due to the Delta variant-fuelled COVID-19 surge and the decline in government support.

Nonetheless, the Omicron variant has the potential to drag on US economic growth in 2022, as the Delta variant did in 2021, according to analysts. 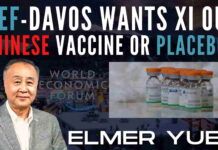 Davos wants Xi out? I China’s non-working vaccine I Winter Olympics in 2 weeks I Elmer explains America, wake up and smell the Coffee!