The Times of India Group is on the radar of tax agencies for tax evasion of its huge advertisement collection of Rs.28,000 crore for the past two decades. According to the complaint filed by a senior marketing staffer turned whistleblower and some minority shareholders, Times of India Group company Bennett and Coleman Company Limited (BCCL) has formed an internal division called Brand Capital and was collecting huge money for advertising and paid news and never showed this income as revenue. According to the complaint, to avoid paying tax this huge income collected of more than Rs.28,000 crores was shown as Long-Term Capital Gain.

The detailed complaint with a series of documents showing the huge income from the dubious Brand Capital income says that this dubious trick was invented when Samir Jain took control of Times of India when his father Ashok Jain absconded from India due to a series of money laundering and smuggling charges in the late 90s. Brand Capital was earlier known as Times Private Treaty and then Brand Equity Treaties.

The complaints say that the Times of India Group will enter into an agreement with companies who wish to advertise and charge special rates for advertising and publishing favourable news for their brand building, sales promotion, stock exchange price fluctuation and even campaign against their rivals. The Group’s other media organizations like Economic Times, Radio Mirchi, Times Now and ET Now will also be used for these covert operations to those who agree to the terms of Brand Capital.

“This is how it acquired its entire Rs.28,000 crores and shown it as investment concealing that this is entirely business income. Full advertisement revenues are shown as investments held by Brand Capital which is earlier known by different names like Times Private Treaty, Brand Equity Treaties and so on. There are more than 800 companies in which Brand Capital holds investments. It is getting these investments in lieu of publishing advertisements and brand building and not plain Private Equity type investment,” said the complaint filed by the whistleblower.

The complaint also said that sometimes the Times of India Group accepted flats for advertisements from real estate companies. The documents attached to the complaint show that from Lodha Developers, the Times of India Group accepted two flats worth around Rs.10 crores in Mumbai in 2007 for advertising. This dubious deal by Times of India is reflected in Lodha Group’s information to SEBI and the company’s filing to the Registrar of Company (RoC) too. “As of date of this Draft Red Herring Prospectus, we have transferred one flat in Lodha Bellissimo located in Mahalaxmi, Mumbai valued at Rs.41.8 million to BCCL and in accordance with the terms of the agreement, another flat in Lodha Bellissimo valued at Rs.57.8 million will be transferred to BCCL prior to December 2009,” said the real estate company’s filings to the RoC. The complaint filed by the Whistleblower and several minority shareholders expose thousands of crores worth dubious deals executed between Times of India Group and several companies including multinational firms.

“BCCL has similar investments in Flipkart, Yatra, Uber, Quikr, Infibeam and several such companies. It owns huge real-estate. All these deals prior to 2010 were direct barter deals of which the above example like Lodha is provided. Later, it became smart and started making two agreements – one of the investments and another of advertisements. So it actually started cutting cheques for investment but the same money came back in form of advertisement revenue, which attracted tax,” said the complaints detailing how Times of India Group controlled by Samir Jain and Vineet Jain evaded paying taxes on the huge Rs.28,000 crore advertisement revenue collected. The complaint also said that as media organization, Times of India Group arm-twisted the companies to enter into dubious deals with their shoddy arm Brand Capital. 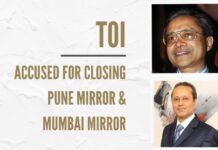