His is the only sensible voice in Indian politics. Analysts and commentators describe him as a maverick politician. His enemies (of which there is no dearth in Indian politics) call him a loose cannon. You may hate him or love him but you can never ignore Dr. Subramanian Swamy, senior BJP leader and member of Rajya Sabha (Upper House of Indian Parliament).

Readers of PGurus may be shocked to know that only lawyers, politicians and some bureaucrats in Tamil Nadu and Karnataka have benefited from this long drawn out legal war.

Dr. Swamy is a living legend and does not need any introduction to the patrons of PGurus.  When on Friday the Supreme Court delivered its final verdict in the Cauvery Water Dispute case between Karnataka and Tamil Nadu, what stood out was the vintage Dr. Swamy’s comments and observations.

He pointed out that state-of-the-art desalination plants could be set up in Tamil Nadu with the technology innovated by Israeli scientists. “I had written to Tamil Nadu Chief Minister Edappadi Palaniswamy that I would help him in getting the technology and set up such desalination plants with Israeli know-how. Though it is almost a year Palaniswamy has not responded,” said Dr. Swamy.

He also disclosed that the Department of Atomic Energy has set up desalination plants at Kalpakkam which take care of the water requirements of the Madras Atomic Power Stations and the Kalpakkam Township. This has been substantiated by the persons who fabricated the de-sal plants at the MAPS. “It is true. What Dr. Swamy says is correct. The desalination plants are feasible, economical and viable,” said a leading scientist of the Atomic Energy Commission[1].

The scientist also pointed out that two desalination plants are already functioning in Chennai and supply 200 million liters per day drinking water to the metropolis. “But you need political willpower and determination to set up such plants. The disadvantage is that politicians may not be able to make much money as commissions from these projects,” said the scientist.

The Tamil chauvinist political parties have started a blame game over the Supreme Court verdict that reduced the quantity of Cauvery water to Tamil Nadu by 14 thousand million cubic feet. The Opposition DMK blamed the ruling AIADMK while the latter put the blame on the DMK. This has been going on for the last 50 years and a permanent solution for the Cauvery imbroglio remains elusive.

The scientist and Dr. Swamy pointed out that countries like Israel, Saudi Arabia have successfully installed desalination plants in those countries. “The entire water requirements in these countries are met by desalinating sea water. Why can’t we adopt that technology?” asks Dr. Swamy.

India has developed much cheaper technology for desalinating sea water. A unique desalination plant based on the Low-Temperature Thermal Desalination Technology  (LTTDT) developed by the scientists and engineers of National Institute of Ocean Technology (NIOT) at Chennai. The institute has set up two such plants at Kavaratti to meet the drinking water requirements of Agatti and Minicoy in Lakshadweep Islands[2].

Why this technology is not being used in Tamil Nadu and other water-starved places in the country has to be investigated. Team PGurus’s probe found out that Dr. S Kathiroli, the master brain behind the LTTD Technology was unceremoniously expelled from the institute.

The legal battle in the Supreme Court and the Cauvery Water Dispute Tribunal has benefitted only one particular group of persons. Farmers do not belong to this group. Readers of PGurus may be shocked to know that only lawyers, politicians and some bureaucrats in Tamil Nadu and Karnataka have benefited from this long drawn out legal war.

The super lawyers who appear for the States of Karnataka and Tamil Nadu in the apex court charge anything between Rs 50 lakhs to Re 1 crore for each appearance. A team of bureaucrats from both the States camp in the national capital and they would stay only in five-star hotels. Many times these officials from the rival States wine and dine together in top-notch bars in the capital. They really live up to the adage “Company Ka Maal…Paani  Mein Daal Do…”

Information gathered by RTI activists in 2007 show that Tamil Nadu and Karnataka spent Rs 47 crore as lawyer’s fee till 2007[3].

The latest official figure elicited through Right To Information Act says that till October 2016, Karnataka has spent  Rs 76 crores as fees for lawyers to fight for Cauvery and Krishna waters[4].

On Friday, a veteran journalist who has wide contacts in Karnataka Secretariat told Team PGurus that till 2017, Karnataka has shelled out Rs 100 crores for the superstar lawyers who represented the State in Supreme Court. It is certain that Tamil Nadu would have spent more than Rs 200 crores for hiring lawyers. B V  Acharya, the venerated legal expert who appeared for Karnataka in the Supreme Court when the Cauvery Delta Farmers Association of Tamil Nadu filed a writ petition challenging the disparity in the distribution of Cauvery waterway back in the 1960s had shown that the petition was not maintainable. Though the Supreme Court took Acharya’s line the Tamil Nadu politicians saw the issue as a gold mine and went ahead by filing cases after cases.

Veterans like Sir C P Ramaswamy Iyer, the former Diwan of Travancore who was also a member of the Constituent Assembly and Dr K L Rao, the visionary politician from Andhra Pradesh  had proposed the interlinking of major Indian rivers like Brahmaputra, Ganga, Godavari, Mahanadi, Cauvery, Krishna to address the perennial water shortage in the country. Dr. Subramanian Swamy in his popular treatise published in the 1970s had recommended that the peninsular Indian rivers should be interlinked so that south India could be made into an evergreen garden. But who listens? All political parties want the water shortage in this country to remain forever so that they could promise water to the people at the time of elections… A mentally challenged youth claimed that interlinking of the rivers would lead to ecological disaster. And we believe it. More about Inter-Linking of Rivers and the forces that oppose the project would soon be revealed… Stay tuned. 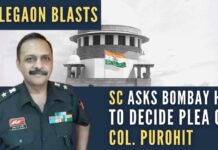 In Jammu and Ladakh, poll prospects of BJP seem quite bright