Who will take over a Kashmir’s CM is still not clear? Why will Mehbooba Mufti not ready as yet to take oath as J&K’s New Chief Minister?

More and more people are waiting for the answer, however, there is no clarity yet.

The National Conference is trying to figure out as to why Peoples Democratic Party (PDP) is not resuming its alliance with the BJP.

Mehbooba’s initial refusal to talk politics was attributed to her bereavement. For the Lok Sabha MP, her father was a political mentor too.

But after three weeks, people are wondering if there is something more than shock which is keeping the daughter away from committing herself to governance in the state.

The statement was not a well-wisher’s concern but an adversary’s comment on the Devil-and-Deep-Sea situation the PDP president finds herself in after the father’s death.

Mehbooba Mufti made her first official appearance after her father’s death on January 26 — at the Bakshi Stadium in Srinagar on the occasion of Republic Day.

The PDP has called a ‘Feedback Meeting’ in Srinagar on January 31 and in Jammu on February 3.

These have been called to get the feedback on the 10 months the PDP ruled the state with its Bharatiya Janata Party (BJP) ally.

The National Conference is enjoying the PDP’s political predicament.

Reacting to Omar Abdullah’s jibe, PDP senior leader Naeem Akhtar said: “I don’t want to get involved in what the Abdullahs say. For us, the welfare of the people is more important than getting into power.”

Sources claiming to be close to Mehbooba Mufti say she is weighing her political options very seriously.

“She is convinced that the 10-month tenure of her father has left much to be desired on the promises the two ruling parties made to each other and finally to the people,” one source told IANS.

BJP leaders in Jammu have said that the final call on government formation will have to be taken by the PDP.

“We will respond positively after the PDP makes the move,” said Sat Paul Sharma, the BJP state president.

But the same sources ruled out any fresh assurances on the alliance agenda.

[dropcap color=”#008040″ boxed=”yes” boxed_radius=”8px” class=”” id=””]S[/dropcap]”ince she will take over as chief minister of the state at a crucial time, there could be a meeting between the prime minister and Mehbooba Mufti and also with Amit Shah,” a BJP leader told IANS.

The 40-day mourning period for the Mufti family will end around February 15. Optimists say a new government will be in place anytime after that day.

Governor N.N. Vohra has asked senior officials to move fast on preparation of the annual budget, which must be passed before March 31. 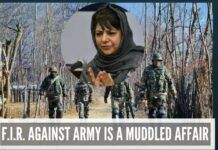 MEHBOOBA GOVERNMENT’S F.I.R. AGAINST ARMY IS A MUDDLED AFFAIR 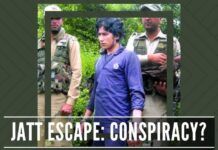 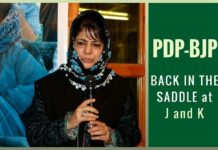