Is Indian media really independent and believes in the concept of ‘Freedom’? Since last Monday, every media house/ journalist has been raising voice on the attack of independence of Media. Today’s meeting of journalists at Press Club of India, aired live by the electronic media is another example in that reference.

Most of the speakers accused the CBI and Prime Minister Narendra Modi for attacking NDTV. Some even accused the complainant and minority shareholder Sanjay Dutt without knowing facts.

Around 200 to 300 journalists attended a protest meet on the Central Bureau of Investigation (CBI) case against New Delhi Television Ltd. (NDTV) owners Prannoy Roy and wife Radhika Roy for ICICI Bank fraud. Most of them were NDTV’s existing staffers and Left wing journalist unions. Most of the speakers accused the CBI and Prime Minister Narendra Modi for attacking NDTV. Some even accused the complainant and minority shareholder Sanjay Dutt without knowing facts.

All speakers made this bank fraud case of Prannoy Roy as attack of freedom of press or even dared to compare it to Ramnath Goenka and Indian Express iconic struggles against Indira Gandhi’s Emergency.

The assembled journalists and speakers conveniently forgot that NDTV’s ICICI Bank fraud was first exposed from their fraternity itself. It was M J Akbar edited Sunday Guardian that exposed the frauds of Prannoy Roy in getting Rs. 375 crores from ICICI Bank in October 2008. The article (see Figure 1) appeared on December 5, 2010. Due to his clout in the UPA Government and friendship with a powerful few in this BJP Government, Prannoy Roy has been evading law for the past seven years.

This article was published in Sunday Guardian in 2010. Why did no one oppose it?

Amazingly in none of the live telecasts on the issue of CBI raids on the premises of the promoters of Media Company, asked Roy this simple question – Why has he till date not made proper disclosures about the benami entity who has made investment of Rs.403.85 crores in his Company and got control of NDTV Ltd AS DETERMINED BY SEBI and ITD? Why didn’t Shourie, Ninan and Shekhar Gupta ask about these shady dealings and source of funds / true ownership of NDTV?

This is the Sunday Guardian front page article on December 5, 2010:

The same edition also published another set of tax frauds committed by NDTV. This is published in the end of this report.

Question to the journalists and the speakers is – This article was published in Sunday Guardian in 2010. Why did no one oppose it? Now, after 7 years and much egging, CBI has finally acted. It was not the CBI’s fault. The basic culprits are the power brokers and friends of Prannoy Roy in the system who managed to rein in CBI for this long. Finally the CBI has acted. Better late than never.

Those who cry from media should learn to obey the law. Media needs to separate the individual Prannoy Roy from the entity he founded, i. e. NDTV. This FIR by the CBI is for the bank frauds he committed. Today he was seen talking like a Trade Union leader. He has no respect for law. He never appeared before the Income Tax Dept. which slapped Rs.525 crores notice for tax evasion and illegal money tripping. He never appeared before ED in Rs.2030 crore FEMA notice. He only sent staffers and tried to make them scapegoats. Those of you who have not yet read my book NDTV Frauds should do so. His shenanigans have been documented in great detail.

When caught for Bank fraud, he is now playing victim. He realizes that now he can’t send any of his minions to sit in an Air Conditioned room and manipulate powerful people. No one is above the law. The corrupt must fall. Many might have giggled when Prannoy Roy claimed he has not touched black money and dealt all in white money. Mr. Roy, read my book. The joke is on you.

Another article that was published in Sunday Guardian in 2010: 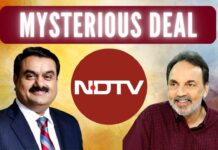 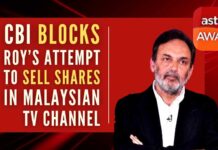 Government mulls over creating a gold exchange for transparent trading