Our bodies have been on sale for the last hundred years. Before the advent of modern fast food culture, we were much more healthy, eating organic food, breathing fresh air and doing other healthy things. Then what happened?

While I don’t condemn all allopathic medicines, I would like to keep these facts in mind while consuming them

Three things happened; governmental regulations, systemic problems and corporate interests. For instance, governmental agencies suggest or support certain guidelines, which may be in the interests of one lobby or the other. The food systems become faulty when research standards are not maintained. Thirdly, Corporate interests sacrifice health for profits.

There are three types of Macronutrients for good bodily health; carbohydrates, proteins and fats. Due to reasons cited above, the proportion of the Macronutrients were manipulated for profits. Our present-day diets contain more than 85% of carbs and sugars. It was projected that carbs produce glucose which is the essential fuel. With the same hand, fat was demonized. Fat causes cholesterol and beyond a level it will clog the arteries and cause heart disease etc. Who manipulated all these? Obviously the sugar lobby!

As a result over decades, the population of the world acquired diseases like obesity, cholesterol, diabetes, Alzheimer’s, dementia etc. The reason? Excess sugar and carb consumption! You may wonder how people get obese even after eliminating fat from the diet, and how carb could be responsible for it. That’s a proven fact. The excess sugar and glucose get converted into triglycerides, a form of fat and stored inside the cells and liver itself. Over the years this fat gets accumulated and bingo, you’re obese. Added to this is the problem of excess insulin, which was secreted to tackle excess glucose, makes the cells insulin-resistant. This condition brings a host of other problems; diabetes goes through the roof. Even though you are obese your cells starve for energy because insulin is unable to get enough energy into the cell.

Then came in the picture another category of corporate player; the Big Pharma. They said we can treat these ailments with quick fix medicines. They conducted not very scientific experiments like no human trials, no double-bind placebo tests, conducted on small-sized test subjects and other things. Then came mass production. Ingredients were added for shelf life and brought side-effects. Supplements were invented and added to the diet regime. While the medicines cured symptoms and not the root cause, it made people dependent on them for life. As for the supplements, the less said, the better. The main problem with them is ‘bioavailability’, which means your body absorbs much less than what is said to be contained in the supplement. While I don’t condemn all allopathic medicines, I would like to keep these facts in mind while consuming them.

One of the main reasons for obesity and fat, in addition to carbs and sugars, is our eating habits. We eat 24X7x365, without break anytime and every time

So, what do we do? Change the main macronutrient from carbs to fat. Keep carbs below 20% of the diet and make fat 60 to 80% and the remaining protein. Why? Because fat is healthy. It helps produce Ketones, which are dubbed as the fourth macronutrient along with the other three discussed above. The brain is made of 60% fat. Ketones replace glucose as a fuel source. They produce less free radicals, cause less oxidative stress and energy lasts longer, and brain health. You feel satiated and consume less for more energy. What about cholesterol? Yes, it will go up, but the levels we are told are artificial. Moreover, the good cholesterol levels only go up. Even the bad cholesterol, LDL, starts containing the big molecules which are good.

Another substance which was unnecessarily demonized was salt. Electrolytes like magnesium, potassium and sodium are important to get the nutrients to the cells through arteries. By saying that sodium causes BP etc, by avoiding salt the electrolytes fail to retain water, circulation is affected, and nutrients don’t reach cells.

Coming back to fat, the second secret, next to reducing carbs drastically, is to get the body to crack stored fat to make ketones. Over a period of weeks, this will become routine and the stored fat will get reduced. Eating more organic fat like butter from the grass-fed cow will supply adequate fuel source. But that’s not enough. Toxins also get stored in these triglycerides which when cracked get released and body gets detoxed. For non-vegetarians, organic meat contains healthy fats and proteins.

Next comes exercise in the form of intense strength resistance training of specific muscle groups, which will release glycogen fats from the muscles and fresh fat and ketones will take over. Without intensity, the muscle growth is stunted, resulting in muscle loss which is called sarcopenia, and loss of body heat called hypothermia. Unfortunately, doctors don’t tell us all this. They keep saying that walking, running, jogging, aerobics etc. help in reducing obesity. The only thing to remember during exercise is not to injure oneself as fitness and health are two different things. One doesn’t follow the other. Both need to be carefully cultivated. Another thing to remember is anabolism and catabolism of the body. Anabolism builds and catabolism demolishes. A balance needs to be maintained. Over workout means the Catabolic effect is more than metabolic. The body will wither away. Work out should be followed by rest and recovery.

One last thing; one of the main reasons for obesity and fat, in addition to carbs and sugars, is our eating habits. We eat 24X7x365, without break anytime and every time. The metabolic system has no rest and breaks down. We have to bring discipline to eating. Fasting is the answer. There are various types of fasting. I would recommend intermittent fasting, which means restricting eating window to eight hours, and don’t eat anything for 16 hours. This will enable the system to lose fat, burn fat for energy, and exercise effectively.

So, enough said. Now let’s switch to fat burning instead of glucose burning, do intense strength training, reduce stored fat, get six packs with increased energy and power! This is exactly what Lord Krishna demonstrated when he stole and ate a lot of butter, to, prove that superhuman powers are possible to attain. So, fat is worth even stealing if necessary! But, we took his teachings too seriously into our minds and not into our bodies! Cows are such life givers and hence the ancient cow culture! 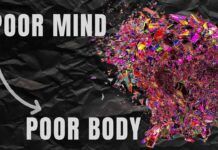 WHO cautions ‘tsunami’ of cases with rising numbers of Omicron and...

As the new variant of COVID-19 spreads, is the world back...