The Celebrations for the Republic Day Parade 2021

When the Celebrations for the Republic Day Parade 2021 were in full swing in India, the PM Boris Johnson of the UK, who was supposed to be the guest of honour, has officially cancelled the trip to India due to the COVID-19 scenario in the UK. Due to this, the Union government has limited options to handle this exigency that has arisen. Although the option of an alternative chief guest does exist for the government. It should note that the risk of holding it in Delhi during the COVID-19 scenario is still high.

To avert a catastrophe due to this risk and also ensure a smooth celebration, it is better to cancel it in Delhi and hold the Republic Day Parade in Kargil-Ladakh. This is a viable win-win option for the government as well as the Armed Forces for the 5 reasons below.

1) Safety of the soldiers should be given the first priority as the covid19 scenario is not yet over.

During the preparations for the parade, several reports have stated that over 100 soldiers had tested positive and this is not a good sign when the Chinese aggression is at the doorstep. Along with the soldiers, the Army leadership, tri-service chiefs, artists, children, policemen have a high chance of contracting the virus. Since the republic day parade also involves invitations to high profile dignitaries like the foreign ambassadors and members of the consulates, it would put all of them at high risk.

Moving to Kargil-Ladakh would save public money from this risky & unnecessary expenditure and even save time on logistics and management.

2) Kargil-Ladakh has infrastructure and roads for smooth conduct of the Republic Day Parade.

Although the weather is too cold in Ladakh, we must note that since our forces are strong enough to fight at freezing temperatures marching past would be nothing but a catwalk for them which they would do it with pride. The Kargil War Memorial in Leh, Rezang La War Memorial in Chushul and several other places in Ladakh have great roads which have been built by the Border Roads Organization (BRO) and the Indian Army and those can be used for the parade and the troops can be gathered from nearby camps instead of transporting from different parts to Delhi that too two way. This will be a memorable one for all the departed souls who laid their lives defending this country from external aggression.

3) Cost to the exchequer will be reduced by moving to Ladakh.

The cost involved in the logistics and operations is pretty high if it is held in Delhi. The cost involved for setting up the seating arrangements & security is incredibly high as the crowd will be heavy in Delhi. The Republic Day Parade requires a 5 tier security to manage the crowd that comes year on year, if this security is put up again, it will only result in high costs for deploying the police i.e the Delhi police and the central reserve police on special duty as they are entrusted with all the frisking. Moving to Ladakh would save public money from this risky & unnecessary expenditure and even save time on logistics and management.

The primary purpose of the Republic day Parade is to showcase to the country the capabilities of the Armed forces but not every Armed forces personnel gets such a privilege. The chances for a person from the frontline borders to participate in the Republic Day Parade is even rarer but the scenario right now can give them an opportunity. The government can celebrate this Republic Day Parade as “For the soldiers, by the soldiers and of the soldiers”. This will ensure both soldiers safety and also civilian safety and at the same time keep the morale of the soldiers even higher for such recognition.

Conducting the Republic Day Parade in Ladakh would be termed as the boldest move by the government, the world will look up to India for standing up to the bullying tactics of China and it will also fire up the mood of the public about Chinese aggression in Ladakh and will give a clear direction that the government is serious about handling China.

This is a great opportunity for the BJP led the Union government to take immediate steps on this regard as it involves the morale of our soldiers. 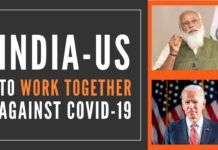 Modi and Biden to work closely together in the fight against COVID-19. Biden assures supply of oxygen, vaccine raw materials & therapeutics

EP 158 India fights back, has enough Oxygen; Biden willing to...

Hillary is the first woman presidential nominee of a major US...

Bengal Elections: Who will win the penalty shootout?