Dr. Ramachandran Nagaswamy, a scholar, writer, and famed archaeologist, passed away today at his residence in Besant Nagar, Chennai[1]. Dr. Nagaswamy was born on 10 August 1930 to Sanskrit pundit Ramachandran Sastrigal[2]. He graduated in Sanskrit from the University of Madras and pursued a master’s degree in Sanskrit. Nagaswamy obtained his Ph.D. in arts and archaeology from the University of Poona[3]. Nagaswamy underwent archaeological training under the Archaeological Survey of India (ASI) and in 1959, joined the Government Museum, Chennai as curator for art and archaeology.

Dr. Nagaswamy served as curator for art and archaeology in the Government Museum in Chennai from 1959 to 1963. In 1963, he was appointed assistant special officer for archaeology for Tamil Nadu state, and from 1966 to 1988, he headed the newly formed Tamil Nadu Archaeology Department.

He made archaeology a very popular subject in Tamil Nadu, especially among children through the publication of pocketbook guides. He was also responsible for involving several thousand schools and college students in cleaning and preserving nearby historical places and monuments. He also popularized monuments by bringing out popular guides in the form of newspapers, priced at ten paise per copy[3]. He was responsible for protecting several historic monuments like the first-century Chera inscriptions at Pugalur, the palace site of the Imperial Cholas at Gangaikonda Cholapuram, the famous 17th-century Thirumalai Nayak palace at Madurai, the 17th-century Danish Fort at Tranquebar, and the birthplace of poet Subramania Bharati at Ettayapuram besides excavating the palace site of Virapandya Kattabomman at Panchalankurichi.

His creative works have been pathbreaking, especially the newer books, which seek to show the reader the beauty and essence of Sanatana Dharma. His seminal book Dharma Yoga, released in 2020, shows how Greek coins have Greek inscriptions on one side and Brahmi on the other side, written in Karoshti (right to left) and shows how Manu’s Dasa Lakshanas (1850 BCE) and the Ten Commandments are remarkably similar and how Sanatana Dharma, Mitra (Sun God), Indra and other gods were worshipped even after Christianity was born.

He was awarded the “Kalaimamani” award by the Government of Tamil Nadu for his pathbreaking work on Sekkilar’s Periyapuranam. He appeared as an Expert Witness in the London High Court, in the London Nataraja case.[4]

Dr. Nagaswamy was conferred the Padma Bhushan award in the year 2018.

I had the privilege of having several conversations with Dr. Nagaswamy and was awestruck at the ease with which he could read Brahmi, the mother of many scripts in use even today.

He also showed me how scripts such as Devanagari, Tamil, Telugu, and even Khmer evolved from Brahmi. In a must-watch video conversation with Rajiv Malhotra, Dr. Nagaswamy explains line-by-line how Thiruvalluvar’s Thirukkural is a translation of Manu Smriti. 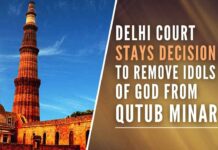