“It was the best of times, it was the worst of times…” – thus begins the classic A Tale of Two Cities by Charles Dickens. In one case, the nation watched, in shock as 2G Special Court acquitted all of charges while just a couple of days later, it got sated with the news that another CBI court has convicted Lalu Prasad Yadav. What do these judgments, taken together tell us? Also, what about the dubious judgments handed down by the Bombay High Court this month?

That there is a price for judgment? Should India go back to the days of Jury based justice (it might actually be a good thing – the villager is much wiser than the urban, suave individual as witnessed in the choices he has exhibited while voting)? And when asked by a judge if he/ she was compromised, they may even tell the truth, enabling the Court to replace the offending jury member with a fresh face from the jury pool.

I am reminded of a case that Professor R Vaidyanathan (RV) mentioned, while releasing my book NDTV Frauds in Bengaluru[1]. He said that both petitioners had bribed the judge – one gave Rs.50 lakhs while the other coughed up Rs.60 lakhs. The judge upbraided both, returned Rs.10 lakhs to the second litigant and declared that now, the law will take its own course!

In another interesting conversation with me, Prof. RV explained how he coined the acronym WAR (Wisdom After Retirement)[2]. He said it is frequently seen that a senior level bureaucrat, who having retired at the Secretary level, would, after retirement write about what ails the specific department that he had worked at and how it should be streamlined! Why not do it when he could? That is the strange dichotomy that exists in India’s babudom. They know the right from the wrong but won’t say anything till they retire.

One suggestion – why don’t they insist that all orders from politicians should be written and signed by them in the presence of witnesses? But this should be done not by a select few, but by the entire rank and file.

I am confident that the 2G Special Court verdict will be overturned by a higher court. But at what cost to the nation? Already there are indications that foreign companies may sue the Government[3] to try and recover some of the money lost in buying the 2G licenses.

As the Chinese say, we live in interesting times… 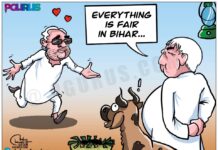