I have been writing for months on some timely actions to be taken by the Modi government (which it, unfortunately, did not do) in order to nip this crisis in the bud. Even as the revealing article by Prof. M D Nalapat came in the Sunday Guardian[1], states about Modi taking direct charge of economic measures to avert crisis, the rupee continues to flounder against the dollar. On Monday, the Rupee started at 71.87 for the Dollar and finished at 72.53 at the end of the trading day. It is as if the market is cocking a snook at the Prime Minister (PM) telling him, do what you want, the shorting effort on the rupee is truly on.

What PM needs to do, to arrest the slide (the 5 steps already announced notwithstanding):

[4] Rupee’s depreciation: Why it makes sense not to sit back and do nothing yet – Sep 3, 2018, Business Standard 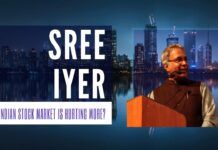 Sree Iyer on why Stock market correction in India is exaggerated