Amid the Gyanvapi row in Varanasi, members of a forum named after Prime Minister Narendra Modi and the Shri Ram Sena have approached the Mandya district administration in Karnataka, seeking permission for Hindus to offer prayers at a mosque, which they claimed stands over the ruins of a Hanuman temple.

Chief Minister Basavaraj Bommai said on Monday that the issue raised by a section of the people on conducting pujas at Jamia Masjid in Srirangapatna would be resolved as per law.

Narendra Modi Vichar Manch and Shri Ram Sena – have also asked the Karnataka government to stop the Archaeological Survey of India (ASI) site from being used as a prayer hall by Muslims.

Bommai said, “Let them give petitions, seeking permission for puja. They would be verified as per law and suitable action will be taken.”

Narendra Modi Vichar Manch state secretary C T Manjunath, who was a part of the delegation, met the Mandya Deputy Commissioner and submitted a memorandum, looking for permission to permit Hindus to supply prayers on the masjid.

“Documentary evidence of Tipu Sultan writing to a ruler in Persia, admitting that there was a Hanuman temple before the mosque was built; along with Hindu inscriptions on the pillars and walls support our stand. We request the administration to allow Hindus to offer prayers at the mosque.”

The site, about 120km from Bengaluru, which was constructed around 1782 during the rule of Tipu Sultan, is a heritage site being maintained by the Archaeological Survey of India (ASI). It also runs a Madrassa.

Former Karnataka minister K S Eshwarappa has claimed that even Muslim leaders accept that a temple existed before the mosque took shape. He said, “Around 36,000 temples were demolished/ damaged during the Mughal rule. We will reclaim all the temples in accordance with the Supreme Court’s ruling without creating any trouble.” 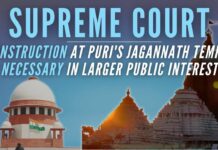