President Ramnath Kovind did the right thing by pulling out of the Silver Jubilee celebrations of the National Stock Exchange (NSE), as it has been under a cloud of the co-location scandal, running into billions of dollars.

A news flash in India Today indicated that several Cabinet ministers may also be attending this event. This is highly inappropriate as the NSE is under investigation by the Securities Exchange Board of India (SEBI) for enabling a select few to gain access to its servers at the expense of the stockholders[1].

The amounts are mind-boggling. In a five-year period, a few select individuals and entities made close to Rs.50,000 – Rs.70,000 crores ($7.7B – $11.5 B)[2]. SEBI has been investigating this case for a while now and like every other probe, this one too is going very slowly. In fact, the current chairman of NSE, Ashok Chawla has been named in a Central Bureau of Investigation (CBI) charge sheet and should resign till the investigation is completed[3]. CBI is also investigating several brokers and individuals who helped rig the system[4].

Many of the founders such as Ravi Narain, Chithra Ramakrishna etc. are all under investigation and will be present at the function, if for nothing else, to project an image that all is well. That SEBI has not demanded Chawla’s resignation is shocking! Combine this with the probes of the Bombay Stock Exchange Chairman, it beggars belief that SEBI actually controls these exchanges and not the other way around.

A similar thing had happened with the ministers frequenting NDTV channel despite it being under investigation by several agencies and only after repeating pointing and prodding has this process been put on hold. One wonders why some ministers like to embarrass themselves and the Prime Minister by acquiescing to attend such events. 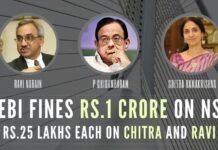 An Imaginary Conversation: When Rahul Gandhi asked PM Modi for 15...