Left-Liberals and their associates in Congress are masters in dirty tricks and accusations. The recent one being against Facebook’s India operations. Now the Left-Liberals and some from Congress who always ally with the Left bandwagon are accusing Facebook and its other platform WhatsApp and Instagram of being Right Wing (RW). More specifically they are accusing Facebook’s India Policy Director Ankhi Das of taking a pro-BJP stand. Everything about these lumpen elements is elevated – they are demanding a Joint Parliamentary Committee (JPC) probe and trolled Ankhi Das with nasty abuses and threats. Now Delhi Police registered a case based on Ankhi Das’s complaint on threats for supporting BJP[1].

The fact of the matter is that Congress and the Left eco-system was controlling social media platforms like Twitter and Facebook for years; it is a known fact that the then Information Technology Minister Kapil Sibal had a big say in the appointments in these social media forums. Many pro-Congress and pro-Left people were appointed in Twitter and Facebook. During the UPA period, that RW even had a squeaky voice is thanks to divine intervention than anything else.

Social Media platforms also want business. If they want India’s business they have to stick to the majority line-of-thinking.

Twitter’s first India head Raheel Khurshid, who was earlier with the controversial TV channel NDTV (how is it running still? Who is watching it?!) was infamous for his many stands against India and the Indian Army in Kashmir-related issues. He was not only anti-BJP / Right Wing, but he was also a Hinduphobe. It is, therefore, no surprise that one finds that many NDTV journalists working in Twitter and Facebook. As much as one likes to think that SM had democratized news, RW voices have been shadowbanned or throttled by these supposedly independent platforms[2].

It must be remembered that Congress was caught engaging a dubious digital lobbying firm Cambridge Analytica in dealing with Facebook to canvass the Indian electorate. What was their mission? Make Rahul Gandhi as Indian Prime Minister in 2019 through dubious means? MRGA? (Make Rahul Great Again?) But the Indian electorate is wise and RaGa lost the election from his “family-town” Amethi in 2019.

During the Lok Sabha election of 2019 and in 2018, Facebook deleted many Right-Wingers’ pages and comments. BJP’s IT Cell head Amit Malviya in his article named who all from Congress and the Left eco-system were appointed on Facebook[3].

Many anti-BJP and anti-Hindu persons from the Left-Liberal-Congress eco-system were appointed In Twitter and Facebook’s India offices. When someone like Ankhi Das is not buying their ideology, she is deemed a villain by this echo-chamber. This development shows that Left-Liberati is worried when a person not from their club is appointed in the Social Media platform’s offices in India. This echo-chamber would brutally delete, shadow ban many accounts of Right Wingers, and those not agreeing with their ideology or their line. They continue to dream that a Sonia Gandhi or Rahul Gandhi-controlled regime will come back in India. Dream on! The basic thing is that they have lost their sense and now cursing, bitching, and accusing all who don’t belong or support their line of thinking.

Social Media platforms also want business. If they want India’s business they have to stick to the majority line-of-thinking. Hopefully, the next to get rectified is Twitter, which is now heavily loaded in favour of this Left-Liberal echo-chamber and their associates in Congress and certain pro-Jehadi organizations. 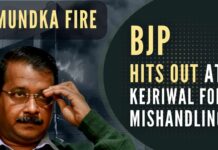 Indian Communists behind engineering the illegal petition of UNHRC in Supreme...