The Congress party suffers gravely from a lack of clarity on issues of national importance. Take the case of the ongoing border row with China. There has not been a single statement from any spokesperson of the party on the needless belligerence that Chinese troops have demonstrated along the Line of Actual Control. Nor has the party commended the Indian forces for standing up to Chinese designs.

Congress leader in the Lok Sabha, Adhir Ranjan Choudhury, had posted his comment on Twitter, condemning China’s actions and expressing faith in the Indian armed forces. The party’s top brass apparently compelled him to delete the tweet. No explanation has been provided to date on this development, either from Choudhury or the Congress leadership.

The US would hardly make a good mediator given that it is an open confrontation with China on the Coronavirus spread and the Chines have slammed him for seeking to begin a “cold war”.

It may be recalled that at the height of the India-China confrontation in Doklam some years ago, Rahul Gandhi had a hush-hush meeting with senior Chinese officials in New Delhi. He had kept the government in the dark. When news leaked out, the Congress first brazenly denied the report. However, it later admitted that the meeting had indeed taken place and that Rahul Gandhi wanted to have a clear understanding of the issue. It never occurred to him that, for a greater understanding, he ought to have confabulated with the Indian External Affairs Ministry rather than the Chinese.

It may be further recalled that when the Congress-led UPA was in power, the Chinese had decided to stay put in the Daulat Beg Oldi region, and a central minister had then downplayed the matter, saying the issue was merely acne on the face. All along in the past, the Chinese had the upper hand, with New Delhi reluctant to take a strong position. Things have changed now.

Does Congress endorse Beijing’s aggression? If it does not, why is it running shy of unambiguously slamming China? Instead of doing that, it is raising questions on the Modi government’s handling of the issue. The party does not seem to appreciate that New Delhi has done the right thing by not backing down. The result has been that Beijing has struck a conciliatory note and said that the issue can be resolved amicably by the two sides. Congress must take into account that important countries such as the US have sided with India on this confrontation and slammed China for its expansionist designs. Of course, one need not take too seriously US President Donald Trump’s offer of mediation between India and China to settle the border dispute. In any case, the US would hardly make a good mediator given that it is an open confrontation with China on the Coronavirus spread and the Chines have slammed him for seeking to begin a “cold war”.

The second example of the Congress party’s confusion is over the nationwide lockdown the Modi government announced some three months ago over the Coronavirus pandemic. Rahul Gandhi said that the lockdown has “failed” and that it was no solution. He conveniently did not offer an alternative solution, because he does not have any. If the lockdown is no solution and failure, can he explain why States governed by their own party extended it even before the Modi government did? Maharashtra did it, and so did Punjab. The implementation of the lockdown is primarily the responsibility of State regimes, and if the lockdown has failed, the responsibility lies with his party’s governments too.

The Supreme Court recently said that it was the responsibility of the States to provide food, water, and shelter to migrants, and those wanting to leave for their homes have to be taken care of from the State they leave.

The Congress is unprepared to take into account the comments of health experts not just within the country but also abroad, that the lockdown announced by the Centre in mid-March greatly halted the spread of the pandemic. But for the lockdown, the numbers of cases could have been many times that of the present, and so would have the mortality rates. The lockdown period also gave time to improve the country’s health infrastructure, especially the availability of ventilators, personal protection equipment, masks, and testing kits on a large scale.

The party’s efforts to put the government in the dock over the migrant issue too has been a dampener. The Supreme Court recently said that it was the responsibility of the States to provide food, water, and shelter to migrants, and those wanting to leave for their homes have to be taken care of from the State they leave. The Congress’s fake concern for the plight of migrants was exposed recently when it promised to offer 1,000 buses to the Uttar Pradesh to ferry migrants to the State, but ended by giving the State a flawed list, with half of the vehicles identified turning out to be either two-wheelers, four-wheelers or ambulances. Some others did not fitness certificates or their insurance cover had lapsed[1].

The Congress is now busy preparing and releasing videotapes that feature its senior leaders like Rahul Gandhi, waxing eloquent on a range of subjects, from the pain of migrants to the revival of the economy. The publicity stunt has few takers. A recent public survey aired by a prominent news channel revealed that the people were by and large satisfied with the measures taken by the Modi government in tackling the pandemic, and in areas of governance in general.

It is time the Congress party abandoned its politics of negativity and understands the pulse of the people.

Note:
1. The views expressed here are those of the author and do not necessarily represent or reflect the views of PGurus.
References: 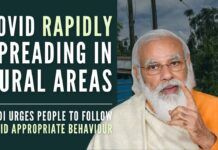 My Letter Series: Dear Ignorant Indian, Those Who Ignore History Are Bound To Repeat It