Actor Akshay Kumar‘s next release under the production banner Cape of Good Flims ‘Ram Setu’ and Karma Media Production‘s ‘Setu’, both have landed in controversies even before their release, as Dr. Subramanian Swamy will be filing a case against the makers of both the movies.[1]

Actor Akshay Kumar’s next release ‘Ram Setu’ which completed its shooting schedule, has landed in controversy even before it is set to run theatrically in Oct 2022. The film directed by Abhishek Sharma is likely to face legal hurdles after BJP leader Dr. Subramanian Swamy through his tweet claimed that he would be filing a case demanding compensation against the makers.

The suit for compensation has been finalised by my associate Satya Sabharwal Adv. I am suing Akshay Kumar, actor & Karma Media for damages cause by falsification in portrayal of the Ram Setu issue in their film for release.

Director Abhishek Sharma has been trying to build a plot when he became aware of a court case involving Ram Setu in which Dr. Swamy received a favorable ruling in the Supreme Court.

The film is co-produced by Akshay Kumar’s own production company and Vikram Malhotra under the production companies Kumar’s Cape of Good Films, Abundantia Entertainment, Lyca Productions, and Amazon Prime Video. This is stated as Amazon’s first Bollywood production in India. Chandraprakash Dwivedi is the creative producer.

The second movie on Ram Setu by Shailesh R Singh under the banner of Karma Media Production, the producer of many hit films, has announced his new film ‘Setu’ on 2nd June 2022. Vishal Chaturvedi will be directing this film. The film ‘Setu’ will be based on the Sethusamudram Ship Channel project that was sanctioned in 2004. In 2007, an interim judgment was passed on this project. According to reports, the film will be presented in the form of a courtroom drama about the same.

According to reports, Setu is a story of a common man who is pained by the government’s decision about the Sethusamudram project.[2]

It’s a well-known fact that Dr. Swamy had fought the case in Supreme Court with favorable ruling that Ram Setu will never be touched nor destroyed for any project.

Dr. Swamy informed about suing both the production companies and some of the stars cast in the film on Twitter claiming that the issue of Ram Setu has been twisted and fabricated in the film. He also stated that the facts have been altered and misrepresented and hence he is forced to take the legal route.

What is the Ram Setu case?

The background to the Ram Setu case by Dr. Swamy in SC:

In the course of the SC argument on the Ram Setu matter, there is an epic reply by Dr. Swamy… When asked, “Do you go to Ram Setu to pray every day?“, Dr. Swamy replied, “I also pray to Sun God every day, but I don’t go there.”

The Ram Setu is at the center of the storm with Dr. Swamy accusing the Modi Govt of delaying his petition seeking to have ‘Ram Setu’ declared a national heritage monument by the Centre was reported widely in the media[3]. Dr. Swamy is pursuing the Hindutva cause and aggressively following up in SC to declare Ram Setu as National Heritage Monument. The case will be heard by the Supreme Court next week[4]. Ram Setu, also known as Adam’s bridge, is a chain of limestone shoals between Pamban Island, also known as Rameswaram Island, off the south-eastern coast of Tamil Nadu, and Mannar Island, off the north-western coast of Sri Lanka. A new recent study using the scientific method has proved that the Ram Setu is a man-made structure.

Dr. Subramanian Swamy further added that the suit for compensation has been finalized by his legal associate Advocate Satya Sabharwal. Actor Akshay Kumar and Karma Media both are sued for damages caused due to the wrong misrepresentation of the Ram Setu issue in their forthcoming film.

Along with the claims against the makers Advocate Satya Sabharwal also shared a copy of the original SC Order to Dr. Swamy’s plea to stop stay Ram Setu demolition. These SC order has been altered photoshopped and used as promotional material by the production company Karma Media which is promoting its forthcoming movie. The advocate indicated that he shall be filling the suit against both the parties shortly. 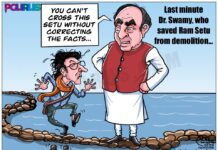 Facts on Ram Setu that no one can twist or deny 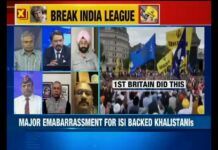 Sree Iyer on NewsX on Mangalyaan Movie, Foreign media bashing India and others