Home DGI EP-124: India will be key Vaccine supplier for QUAD; even illegals in...
Facebook
Twitter
Telegram
WhatsApp
ReddIt
Sree Iyer: Namaskaram. Hello and welcome to PGurus Channel. I’m your host Sree Iyer. Today is the 23rd of March, 2021 and episode 124. Sridhar Chityalaji is unable to join me today.
To start with the main points. Police report an active shooter in Boulder, Colorado at a  King Soopers grocery store. No news on casualties or injuries.
India is the fourth largest military force after China, the US, and Russia according to the Military Direct Report.
In the United States news, China’s confrontational military build-up to be laid bare by the US spy agency in unprecedented detail. The US public and private researchers are about to get an unprecedented look at the scope of China’s military build-up.
The national geospatial-intelligence agency, NGA, which oversees the US spy satellite imagery is preparing to produce public reports on China’s military and National Security Programs as part of an intelligence authorization law approved for the fiscal year 2021. The law calls on vice-admiral Robert D Sharp NGA director to launch the report and to get all the details of the Chinese military. This was signed into law in December 2020 and the funding for this was at $1.4 trillion.
National Security advisor Jake Sullivan said it was not a mistake to call Putin a killer. President Biden was asked a direct question. He gave a direct answer. That’s how he has operated for 40 plus years in public service and it is how he will continue to operate as president.
Leaked Photos show crowded conditions, no social distancing at border facilities. Mainstream media calls out Biden Administration for lack of access at the US-Mexico border. Trump says Biden is destroying the country through border actions. US officials to hold talks in Mexico on migration. The Biden Administration has barred journalists from visiting migrant holding facilities on the southern border and photos released may explain why?
Project Veritas and Axios both published images reportedly from inside the Customs and Border Protection overflow facility in Donna, Texas, showing crowded conditions and little social distancing within the clear plastic makeshift holding cells. This Marsh 2021 photo provided by the office of Congressman Henry Cuellar, Texas 28, shows detainees in a Customs and Border Protection temporary overflow facility in Donna, Texas.
In stimulus news, the 1.9 trillion stimulus package, Democrats rush to fix the package as it has already triggered a lawsuit. Mr Biden and his team spent last week touting the benefits of the legislation. They will now have to fix some of the unintended consequences which include looming Medicare cuts, a child credit that the IRS says it will struggle to implement on schedule.
And language limiting the State’s ability to cut taxes that have already triggered at least one lawsuit.
Illegal immigrants also will be receiving 4.35 billion in stimulus checks. The Centre for Immigration Studies on Monday estimated that at least 2.1 million illegals could be eligible for 4.38 billion wired directly into their checking accounts, just like the hundreds of millions of legal Americans who started receiving these checks last week. One-third of small businesses anticipate laying off workers if Congress increases the federal minimum wage to $15 an hour, according to the latest CNBC SurveyMonkey small business survey. A recent Congressional budget office analysis forecast that a $15 minimum wage would lift 900,000 Americans out of poverty, but result in 1.4 million fewer jobs.
The next stimulus is coming and the bill priced at three trillions is split into three parts; infrastructure, fighting climate change, and reducing economic inequities. We will have the details in the next few days. The bill is likely to be released in three tranches as per Biden advisors.
In India news, the India-Pakistan sacred peace deal was mediated by top UAE Royals, while this has been doing the rounds in India, many do not believe it. Do watch my hang out with Abhijit Iyer Mitra, Ask Abhijit, Episode 7 for more on this.
India to participate in a joint anti-terror exercise with China, Russia, Pakistan as part of SCO meet. India is set to partake in an anti-terrorism exercise along with China, Pakistan, and the other members of the eight-member grouping called Shanghai Cooperation Organization- SCO, reports Economic Times. The decision to hold a joint anti-terrorism exercise called Pabbie Anti-Terror 2021 was announced during the 36th meeting of the Council of the Regional Anti-Terrorist Structure- RATS held in Tashkent, Uzbekistan on 18th March.
With professional low-cost medical facilities, India might be the next go-to destination for medical tourism. Covid-19 pandemic pushes back India’s 5-trillion GDP goal by three years according to BOA Securities.
In Global News, US, United Kingdom, and Canada join the EU to impose China sanctions over Xinjiang abuses, Japan is the only G7 member who’s missing.
Taiwan loses two fighter jets in a crash, a third such case in months. These are F5s used only for training.
Russia’s top Diplomat Lavrov starts China visit with calls to cut US dollar use.
Why QUAD boasts India’s vaccine diplomacy. The vaccine partnership announced by the QUAD grouping comprising, Australia. India, Japan, and the US are some of the most concrete takeaways from the leaders’ first-ever Summit this month, given that the world is still battling the covid pandemic. Under the joint effort, the four nations will pull in their financial resources and allow India to manufacture close to 60% of the world’s overall vaccine needs.
In markets, FED Chair. Jeremy Powell says that Crypto is a speculative asset that is a substitute for gold.
Markets and Tech Stocks rise as bond yields fall below 1.7%.
Stimulus checks hitting bank accounts this Wednesday triggers hope of spending.
Infrastructure stimulus anticipated drives Industrials. The Dow Jones Industrial Average rose 103 points, SNP 27 points, and NASDAQ 162 points. Crude is at $61.47, Brent at $64.62.
10-year treasury is at 1.684%, 30-year treasury at 2.39%, Bitcoin is at $54,712.

That’s all for this episode. We’ll be back tomorrow. Same time. Same news. Same locations. Thanks for watching. Namaskar. 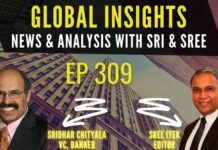 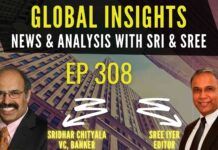