All throughout history, there have always been Judases/ Mir Jafar’s in every community around the world

Peace be upon you, brother Bob. When you were elected again (thanks to the “intelligent” Hindu-American population that thinks being a Democrat is for the best), you had met with us, where we had talked about bringing down the image of India, and it’s Prime Minister, Modi. The first step was to address (or should I say, bemoan) the lack of “democratic values” in that country, as well as the “ill-treatment” of minorities. Thank you for asking Lloyd Austin, the Secretary of Defence, to do this. The most “diplomatic” and, obviously the best way is to term everything “anti-democratic”. Thank you for keeping to that “party-line”.

Let’s not talk about corruption, please. For very obvious reasons, we don’t want you to get embarrassed by unfair people bringing up your past “indiscretions”. After all, we all are human! Now, we also don’t want to bring up anything to do with Pakistan, even though that country is, and has been from its inception, an epitome of human values and democracy. Let’s also not talk about Cuba, the country of your parent’s origin, again an epitome of democracy. The primary goal is to address India and its leadership. We did talk to the “Crown Prince” from the Indian National Congress (INC) and he’s agreed to work with us to bring down Modi’s image.

To equate this to something comprehensible, think about a whole lot of Indians moving to your state of NJ. Wait, bad analogy. You already have a surplus of them in your state, but you get my drift.

Now, we do have a few “obstacles”, if you will, in the form of educated Muslims, née minorities, in India. Even though the Muslim population is at an all-time high of 19%, in sheer numbers, they’re not as many terrorists, in Pakistan. If this is brought up by the PM of India, please tell Joe and Lloyd to avoid answering this question or to give vague answers like “we are looking into it” or something that doesn’t embarrass anyone of us. Coming back to these educated Muslims, let’s see if we can call them “brainwashed” or use the phrase Stockholm Syndrome. It sounds more sophisticated than calling them brainwashed. There have always been Judases/ Mir Jafar’s in every community around the world, all throughout history. That hasn’t stopped the crusades against humanity, oops sorry, inhuman beings; Hindus, the world around, have had it too easy what with their education, money, fancy cars, big houses and whatnot.

Looking at the political geography in India, we need to “assist” the youth from the minority population, against this majority, if only to destabilize the current government. Bringing in the left-leaning parties like the INC, the communists (I know they call themselves communists but, in this case, they don’t adhere to communism; it’s just a name to mislead the people) and other left-leaning parties/ “intellectuals” will definitely “assist” us in bringing down this populist government. These parties will definitely turn a blind eye to any “reactionary adventures” one might undertake in that country.

Coming back to the point, we need to ensure that the people, specifically the Democrats, understand the need for this. Republicans are prone to errors in judgement. We shouldn’t be. The fact that many Muslims are leaning towards the right-wing party, in power, shouldn’t mislead us. They have all been misled by this party. How is it that people, non-Muslims, are being relocated to the far northern state of Jammu & Kashmir, where a few years ago we had a 99% Muslim population? I’m sure you have noticed, non of the “real” Kashmiris have objected to this act!! The Pundits from this state, left the state, of their own volition. A few miscreants lets not term them Muslims as it could damage our reputation, maimed, raped and killed a few Hindus and that became the reason for, what the mainstream media term, “a migration” of the Pundits. To remove Article 370/ 35A and then ask people, not from the state, to settle there (they’re providing incentives like jobs) is a travesty that has never EVER happened. To equate this to something comprehensible, think about a whole lot of Indians moving to your state of NJ. Wait, bad analogy. You already have a surplus of them in your state, but you get my drift.

Democracy has fallen to an all-time low, as has an intolerance, in India. Where one could get away with “expressing” themselves, graphically and otherwise, against temples and their various gods and goddesses, talking to their reluctant unmarried female population, cross-community love marriages and conversions previously, one, now, has to face the wrath of an intolerant Hindu community. To ask Muslims to be equal to the majority community speaks volumes about the intolerance in the communities there. We need to step in and ensure that Muslims are not relegated to the general population but hold a special status like they did during the MMS government. MMS was right! The first claim of ANY and ALL Indian resources should go to the Muslim population, and why not! We brought them culture and education; they previously had none of these! To make light of MMS, and his brilliant oratory qualities show the level to which the ruling BJP has fallen. To add to this, calling the “Crown Prince” a “Clown Prince” is ridiculous!

One of the biggest temples in the world, probably the richest, is in a quaint little town called Tirupati. The “secular” Chief Minister, akin to Governor here in the USA, put some Christians on the board of governors of this temple. Rather than hail this non-discriminatory selection, people revolted and asked whether the Vatican would do the same with their board of governors, or would Mecca/ Medina do the same? Apples and Oranges, brother Bob, apples and oranges! We don’t have a board of governors in either place, so the question is moot!

Brother Bob, you’re doing a great job and should continue to do so. Regardless of your trips to the Dominican Republic, for “entertainment” and “stress-relieving”, you should continue to hammer away at the blot on humanity, India. Again, our request is that you stay far away from any discussions about Pakistan and ensure that the topic stays in India. We need to bring their booming economy down so as to make them dependent on our government.

Do not worry about Hindu Americans, from NJ, voting for you. They’re blissfully unaware of anything other than the price of gas and onions and would vote for the Democratic Party, regardless of what you say, or do. Stay the course, and we will back you to the end. 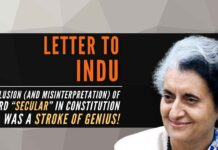