This is the second and concluding part of the article on Ehtics committee. For the first part, click here

We start out by listing the Framework of Code of Conduct for Members of Rajya Sabha (RS), as  accepted by all parties – the report was submitted by S B Chavan in Dec 1998.

The Members of Rajya Sabha should acknowledge their responsibility to maintain the public trust reposed in them and should work diligently to discharge their mandate for the common good of the people. They must hold in high esteem the Constitution, the Law, Parliamentary Institutions and above all the general public. They should constantly strive to translate the ideals laid down in the Preamble to the Constitution into a reality. The following are the principles which they should abide by in their dealings:

[dropcap color=”#008040″ boxed=”yes” boxed_radius=”8px” class=”” id=””]W[/dropcap]hile the Rajya Sabha does provide for the maintenance of members register of interest, it mandates disclosure only in five categories as opposed to global standards of at least ten. Besides, the registry is not open to public by default.

Kindly note that this is applicable only to members of RS. One is not sure if all RS members are acting as per these guidelines and if ethics committee under Karan Singh is monitoring it.

Lok Sabha(LS) does not maintain a list of complaints or enquiries, nor does the Rajya Sabha. This either means that there is poor data management and disclosure or that no complaints have been made to the ethics committees nor have cases been taken up suo motu. This despite the fact that several clear conflicts of interests exist between members’ private interests and parliamentary functions as this News laundry report shows.

Hema Malini wanted a tax cut for water purifiers when she was endorsing Kent Water purifiers. The examples are plenty…

This reveals that in Indian context there are only interests and no conflicts exist.

As earlier indicated Lok Sabha does not require its members to provide information to any registry. The ethics committee takes up the complaints as and when they arise.

A major issue awaits the deliberations and decision of the ethics committee of LS headed by L K Advani.

[dropcap color=”#008040″ boxed=”yes” boxed_radius=”8px” class=”” id=””]R[/dropcap]ahul Gandhi is alleged to have become a citizen of UK and also secretary of a company in that country. The papers pertaining to it have been published by Dr. Subramanian Swamy. The same has been submitted to ethics committee of LS by an LS member Mahesh Girri from Delhi. We wait with bated breath about the way this ethics committee headed by L K Advani is going to deal with this serious case.

We feel that transparency is the best disinfectant for many of these ethical issues.

Both houses of Parliament must keep registers for all members like in UK and it should be available on the net. The deliberations of the Ethics committee must be open to public and experts should be encouraged to give evidence/ their views.

As of now unfortunately our elected representatives are perceived  as a bunch of self-seekers and treasury looters. After 70 years of our democracy we must take steps to rectify such perceptions and then alone younger generation will be less cynical and more respectful of our elected leaders. 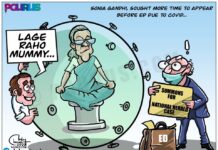