J&K: Two non-locals both from Bihar killed by terrorists in Kashmir

This is the third attack on the labourers earning their livelihood by working in the Kashmir valley.

According to the police, “terrorists fired indiscriminately upon non-local labourers at Wanpoh area of Kulgam. In this terror incident, two non-locals were killed and one was injured.” The police said they have cordoned off the area and started an investigation.

Both the deceased have been identified as Raja Reshi Dev and Jogindar Reshi Dev, both from Bihar.

Since October 5, a total number of nine civilians have been shot dead by the terrorists.

On October 5, three civilians including a street vendor from Bihar Virender Paswan was killed along with a Kashmir pandit pharmacist ML Bindroo and a local taxi union president Mohd Shafi Lone from Bandipore. Three days later a Sikh teacher working as a school principal Supinder Kour along with a Jammu-based teacher Deepak Chand were both singled out and killed in cold blood inside the school premises in the Eidgah area of Srinagar. On October 16, a carpenter Sageer Ahmad from the Saharanpur area of Uttar Pradesh and Arvind Kumar Sah from Bihar were killed in cold blood.

The ripple effect of the merciless killing of two more laborers was felt across the Hindi heartland.

The credibility of the UT administration is at stake. If in the coming days it failed to prevent fresh strikes on civilians the situation could take an ugly turn with a large-scale exodus of nonlocals from the Kashmir valley. To avert this kind of situation the UT administration may have to pull up their socks and deal sternly with the terrorists to instill a sense of security among the workforce and create a conducive atmosphere to welcome large numbers of tourists during the winter months.

For the first time Bihar Chief Minister Nitish Kumar, worried over the targeted killings of citizens from Bihar, spoke to LG Manoj Sinha and raised serious concerns over their safety in Kashmir.

According to ground reports from different parts of Kashmir, a large number of labourers and others hailing from different states of India decided to shift to safer locations. At some of the more vulnerable areas, local police stations and central paramilitary forces organized their stay and provided logistics support to ensure their safety.

Jammu and Kashmir LG Manoj Sinha while condemning the targeted killing of labourers from Bihar said “Our security force will give a befitting reply to terrorists. J&K govt stands by the families in this time of grief”.

Junaid Azim Mattu, Srinagar Mayor used the harshest language to condemn the killing of labourers from Bihar. In a tweet, Mattu said, “In the strongest of terms condemn yet another barbaric terror attack in Kulgam resulting in the death of two non-local workers. Madness! Senseless and barbaric! My heart goes out to the families of the two deceased and I pray for the recovery of the third injured victim”.

In the strongest of terms condemn yet another barbaric terror attack in Kulgam resulting in the death of two non-local workers.

My heart goes out to the families of the two deceased and I pray for the recovery of the third injured victim.

Denying the involvement of Kashmiris in the recent spate of civilian killings in Jammu and Kashmir, Member of Parliament and National Conference President Dr. Farooq Abdullah on Sunday said these incidents have been carried out by outsiders under a “conspiracy” to defame Kashmiris.

“These killings are unfortunate and done under a conspiracy. Kashmiris are not involved in these killings. It is an attempt to defame Kashmiris,” he said.

The former J&K Chief Minister Abdullah said these incidents are an attempt to disrupt the peaceful atmosphere in the Valley.

Two non-locals were shot dead by militants in the Srinagar and Pulwama districts of Jammu and Kashmir on Saturday.

Before that, seven civilians, including four from minority communities, were killed by terrorists in Kashmir, triggering fear among the people in the Valley and criticism of the security apparatus by political parties. Asked about the NSA level talks between India and Pakistan, Abdullah said any initiative that leads to friendship is welcome.

“We should pray and hope that there is a friendship between the two countries and we can live (in peace),” he added. 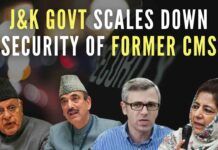