As mentioned in Part 1 of this series, I had wondered aloud as to why some essential (at least to me) information was kept out of Ajay Shah’s resume. I reached out to him and here are the questions and his replies:

This should start as a good starting point for what I am going to write about in this episode. A couple of instances are listed below which show how opinion about India’s finance and policy were shaped.

Started in 1999, once a year, economists/ specialists/ lobbyists from the world over would gather at a quaint hotel in Rajasthan. The Neemrana Fort-Palace has played host to this conference which seems to have gone until 2014 after which it abruptly stopped. The December 2014 conference had on its panel speakers like the then Governor of Reserve Bank of India, Raghuram Rajan, the Chief Economic Advisor Arvind Subramanian, the then Minister of State for Finance, Jayant Sinha, Montek Singh Ahluwalia, the then CEO of National Stock Exchange Ravi Narain among others. There were some heavyweights from United States too – Martin Feldstein of Harvard, Mark Aguiar of Princeton and James Poterba of MIT and NBER.

This annual conference was inspired from the one that takes place annually in the United States in August, at Jackson Hole, Wyoming where the industry meets the high priests of finance in the Government[1]. The December 2014 booklet describes how the Neemrana Conference came about, thanks to the initiative of a few individuals such as Rakesh Mohan, Director-General of the National Council of Applied Economic Research (NCAER) in the late 1990s and Martin Feldstein, the then President of National Bureau of Economic Research (NBER) in the US. Raghuram Rajan also played a significant part in putting together the conference.

Ajay Shah was a prominent player in these conferences (as you can guess from the size of the font of his name in the above picture). What is striking about these conferences was that only a select few were invited – notice the almost complete absence of academics from India…

Shah was perhaps able to impress Montek Singh Ahluwalia, who has been in one high position or the other in the Ministry of Finance (until recently). It is easily seen that the path that the Government of India should follow was perhaps charted in conferences such as these, where the US view of how Economics should be was taken as gospel truth.

Some of the objectives that American market philosophy is to let a few big players dominate the market. In fact research indicates in any field only 3 players can make money and be profitable. Neemrana is just one of the platforms that the Ajay Shah and his associates (call them A-Company, fully devoted to the success of the C-Company (Chidambaram & Associates)) were cultivating and capturing. Their reach spread across various committees set up by the government on matters pertaining to financial markets, forums and industry bodies in India and abroad, to ensure that except that of the NSE and its benefactors, no other alternative voice or reason could be heard. For instance, MCX was one of the top global commodity exchanges in the world, when it was operated by the founders (now it has fallen by the wayside with the new management) but could not be admitted as a member of the World Federation of Exchanges (WFE) in which Ravi Narain was a board member. While the objective of an open and transparent market would be to involve all stakeholders of various sizes and types to think and work for what is the best for the industry, the A-Company were primarily working to tweak the Indian markets to fulfill the requirements of the C-Company.

And that objective was very simple and they almost achieved it. The financial markets industry should be a small club headed by NSE as the institution and A-Company as the think tank. The ecosystem will be pruned to contain a small number of brokers whose growth will be determined by their allegiance to NSE as numerous players of different sizes will be gradually eliminated by making their business unviable by introduces rules and regulations. The operating environment will smooth for the big ticket players but tough and not possible for the smaller players. That way greater control of the market will be possible.

Once the control is obtained, the market could be tweaked to order of one’s choice. There would not be any questions on abuse of P-Notes, there will be no or little check or oversight on new practices and products, that could make them to design the business in the manner what they want rather than what the nation needs. The outcome of this strategy is that India is still struggling with growth in the real economy. It can still boast of an exchange that has the highest turnover on Index options with little relevance for the real economy but could make obscene profits to the various interests owning, controlling and regulating the exchange. Which is why the incident of HFT abuse in NSE came out not due to either any research house in India or a brokerage firm or the regulator but from a whistleblower in the US who has been keenly watching the way the market was being rigged by a select few with fancy degrees and fancier designations.

An instance of how the narrative was shaped and how the tempo was built in favor of HFT by the A-Company is described below.

High-Frequency Trading (HFT) burst upon the stock exchanges sometime in 2009-2010 when a sizable amount of stock trades was being performed using the HFT techniques of Front-running, Dark Pools etc. It must be borne in mind that the first arrest of a programmer, Sergey Aleynikov, who was charged with stealing code from Goldman Sachs (GS) happened in 2009 so presumably, GS was already heavy into HFT by then.

That something was fishy about HFT was observed by Brad Katsuyama, of the Flash Boys fame[2]. By 2008, many institutional investors, such as the Royal Bank of Canada (RBC) started observing that even simple trades were costing them more than before. They started digging into this and uncovered a remarkable truth. It was as if HFT traders were lurking, waiting for them to put out an order and then act on it immediately, almost in a predatory fashion! What was even more frustrating was that they could do nothing about it. Brad Katsuyama, who headed the RBC trading desk at its New York office was determined to get to the bottom of this and with the help of other specialists, narrowed down the cause as being due to HFT companies[3].

The book Flash Boys by Michael Lewis came out in 2012. Michael Lewis went on national television in the United States and said that the United States Stock Market was rigged. But even as late as in 2014, Ajay Shah’s blog site was still advocating the merits of High Frequency Trading[4]. Authors Nidhi Aggarwal and Susan Thomas (wife of Ajay Shah) were extolling the virtues of HFT and AT (Algorithmic Trading). Their theory was based on the data that they got from NSE (while all the scamming was going on there!). The authors even published a paper on this titled The causal impact of algorithmic trading on market quality[5].

In another blog post published on July 10, 2015, Nidhi Aggarwal and Chirag Anand[6] argue that Despite all the fears and the measures that are being taken to curb HFT, one needs to note that the evidence regarding how HFT (or AT) hurts the market is yet to be established. Concerns such as a higher percentage of algorithmic orders create a higher level of systemic risk in the financial system are not backed by strong empirical evidence. 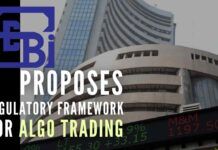 Is It time For Structural Realignment Of RBI?