India to get its own digital currency

India is going to legalise the crypto-currencies and it is expected that the Government of India (GOI) is going to come out with its own digital currency. The Union Finance Ministry is placing a bill ‘The Crypto-currency and Regulation of Official Digital Currency Bill, 2021’ in Lok Sabha in the ongoing Budget Session as per the papers placed before the Parliament bulletins. “To create a facilitative framework for the creation of the official digital currency to be issued by the Reserve Bank of India (RBI). The Bill also seeks to prohibit all private crypto-currencies in India; however, it allows for certain exceptions to promote the underlying technology of crypto-currency and its uses” said the purpose of the Bill in the papers placed before the bulletins. According to officials, the Bill will be placed in coming week for debate and voting. It may be passed to Standing Committee for detailed debate before passing the Bill, the said.

For the past six-seven years, including India, many countries were looking for the introduction of the digital currencies, when Bitcoin-like crypto-currencies started flooding in the world and their trades became proffered in many sectors. The Reserve Bank of India (RBI) is also exploring the option of issuing a digital version of the Rupee, which could serve as the Central Bank Digital Currency (CBDC).

The Finance Ministry’s decision to introduce The Cryptocurrency and Regulation of Official Digital Currency Bill, 2021 comes a week after the RBI said it had begun exploring the possibility of issuing and developing a digital currency or digital Rupee.

The proposed Bill will provide the Reserve Bank of India (RBI) with the necessary legal powers to develop a central bank-backed digital currency (CBDC), according to Parliament bulletin on the new Bills to be placed before Lok Sabha and Rajya Sabha.

The government wants to promote the use of blockchain across various use-cases, this Bill is expected India’s entry the global race of digital currencies or CBDCs while at the same time banning “private” crypto-currencies like Bitcoin and Ethereum among others. Recently China also banned private operators in this field by regularizing the government operation on digital or crypto-currency.

The Finance Ministry’s decision to introduce The Crypto-currency and Regulation of Official Digital Currency Bill, 2021 comes a week after the RBI said it had begun exploring the possibility of issuing and developing a digital currency or digital Rupee. This is a reversal of the RBI’s position. Back in December 2019, RBI Governor Shaktikanta Das said that it was very early to speak on CBDCs. “Some discussions are going on. Technology has yet not fully evolved. It is still in the very incipient stage of discussions and the RBI we have examined it internally,” Das said. Indian crypto founders are taken aback by this news, but still, hope that the government will work with the industry to ensure that there is some legality to their operations going forward. 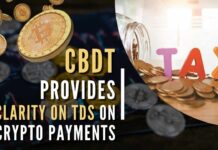 With the launch of GSLV F05 ISRO says ready to launch...

PGurus appreciates your support but there is much more to do…