The Italian court’s judgment exposes the role of Sonia Gandhi, Manmohan Singh in AgustaWestland Chopper Deal. The 225-page judgment also reveals that Sonia’s Political Secretary accepted the commission of €15 to 16 million ($17 – 18 million) from the middlemen. The judgment of the appeal court in Milan convicting AgustaWestland chopper company chief Giuseppe Orsi described how the firm paid bribes to top Congress leaders in India and lobbied with them to bag the Rs 3600-crore ($451 million) deal. Reproducing the handwritten notes seized from middlemen, the judgment says that the political leaders accepted the commission of 15 to 16 million Euros (around Rs.120 to 125 crores) in the controversial purchase of 12 VVIP chopper deal. It also names the role of Sonia Gandhi’s trusted aide and AICC General Secretary Oscar Fernandes and the then National Security Advisor MK Narayanan (Page 193).

Mrs. Gandhi and her closest advisers are the people who the British ambassador should target…

The 225-page judgment of the appeal court in Milan also annexed several documents, handwritten notes exchanged between the middlemen on how the total commission of Euro 30 million between India’s political leaders, bureaucracy, and Air Force officials. A letter dated March 15, 2008, seized by investigators shows the main middleman Christian Michel, who is still a fugitive, writing to Peter Hulet, then India region sales and liaison head of the helicopter company. The letter states that Sonia is the main driving force behind this deal and she will no longer fly in the existing MI- 8 choppers. The letter is quoted verbatim in the judgment. Details of lobbying and corruption of Congress leadership, writing to the then British High Commissioner in India that he should target top Congress leadership for clinching the deal are clearly explained. “Dear Peter, since Mrs. Gandhi is the driving force behind VIP will no longer fly in the MI-8. Mrs. Gandhi and her closest advisers are the people who the British ambassador should target,” said the letter of Michel seized by the probe team. This letter was seized from the home of arrested middleman Guido Haschke in later early 2013.

The judgment also says Haschke had identified all the Congress leaders including Sonia Gandhi and Ahmed Patel on the court when their photos were shown to him during the trial by the Italian prosecution.

The Page 9 of the Judgment also affixed the handwritten note of Michel exchanged to Haschke on how to distribute the total commission of 30 Million Euro. Air Force officials were allotted six Million Euro and Bureaucracy including Defence Ministry officials to be allotted 8.4 Million Euro. The note gives split up to several top bureaucrats like DG Acquisition, Defence Secretary (DS), Joint Secretary(JS) etc. For more, see the interactive Pie chart below:


The note says Political leaders were to be allotted 15 to 16 Million Euro and the name shown to political level was noted as AP. Only one political leader to whom the money handed over is shown as AP, which refers to Ahmed Patel as confirmed on page 204 (see picture above). The note also shows on sharing the commission with ‘Family’ and the Judgment says it meant the family of the then Air Force Chief S P Tyagi.

Page Nos. 163 and 164 names Manmohan Singh and details that Orsi used Italian leadership and diplomats to contact the then Prime Minister to scuttle the probe by non-cooperation from Indian government side. In Page 163, the Judgment produces a hand-written note by Orsi from jail in July 2013 asking his people to contact then Italian Prime Minister Monti or Ambassador Terracciano to call Manmohan Singh. 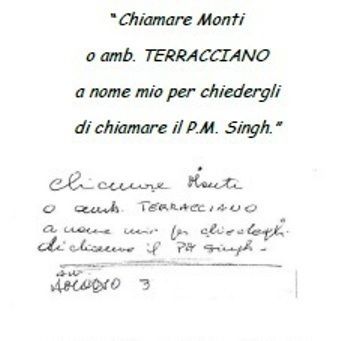 “Call Monti or Amb. Terracciano in my name to ask him to call the PM Singh,” said the note seized from the prison cell of Orsi. The Judgment in several areas blames the non-cooperation from Indian authorities including Defence Ministry and other probe agencies in 2013.

Below is the translation of Pages 162-165 of the judgment. The complete judgment (in Italian) is at the end of this post. The grammar may not be perfect in some sentences – it is reproduced here for completeness.

The documents also show a wide range of “surrounding” circumstances that outline a more widespread and grave dimension of the case (both from the point of view of the number of the people involved and in terms of financial data than it appears from the description given in Chapter A) which is unlikely to be clarified, due to the limits that the investigations have met in the present case, particularly because of the lack of responses from countries involved in the case, to the requests of assistance placed by the Italian Judicial Authority: this showing a substantial disregard to arrive at a full explanation of the facts, effectively demonstrated by the procedural behavior of the Indian Ministry of Defense (which brought a civil action in the criminal proceedings in the first instance of this judgment), already effectively stigmatized in the appealed judgment.

This attitude of the Indian authorities with regard to this trial clearly brings to mind an episode that occurred to ORSI during the preliminary investigation, and falls within the context of the previously mentioned initiatives of the defendants intended to disperse and tamper the evidence, and to create elements which are favorable and coherent with the pre-agreed line of defense.

In the period in which the above (ORSI) was jailed at the prison of Busto Arsizio, the custodial agents found in his cell, among his papers, a handwritten note (a copy of which was produced in the proceedings) which reads:

in my name to ask him

Given the date on which the document was found (03/07/13), the information contained in the text, the context in which the protagonists of this story act and move, and other indications which appear from the documents, it is possible to identify the people mentioned (in addition to the lawyer of the defendant):

We are obviously not in a position to determine what was the message that ORSI, during his detention, intended to send to the Head of the Government of India, but the same can be guessed if we think – on one hand – about the outcome of the requests for judicial assistance sent to Indian Authorities, of which we spoke about above, and – on the other hand – about the intense activities of evidence tempering which the protagonists of the story carried out for a considerable period of time, and with a considerable deployment of resources.

The memories written by the defense “skip” to talk about such activities. They dedicate them only a few lines of the extensive defensive memories of Spagnolini dated 03/24/16:

“This is the lawful alternative explanation that takes into consideration also Haschke’s wish … to get rid of some papers – which instead have been found at Agusta and that pertained to consulting activities provided by GORDIAN and which could be mixed with the contract of engineering works”.

In addition to the attempt of the defense to circumscribe Haschke’s behaviour to the hiding of “some papers”, the defense here repeats the same reductive interpretative line already seen for the dialogue between Haschke and GEROSA on the corruption and omits to quote any reference to the prolonged tampering activities of the evidence base directly attributable to the accused, and any reference to the agreements on the defensive line and on the representation of the incident to be provided to the Judicial Autority in order to give a semblance of legality to their relations: this, given the absence of any explanation from interested parties or contradicting versions, inevitably results in a further argument in favor of the prosecution.

In brief, from the analyzed conversations we can get unequivocal indications about:

About this, ORSI and his defenders evoke a conspiracy hatched by the “old guard” of FINMECCANICA against him, as the leader of a line of radical renovation: hypothesis that cannot be accepted, due to the absence of reliable evidence. 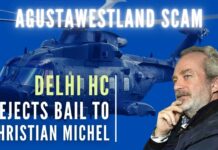