History reveals that philanthropy is definitely not an inherited trait. It is interesting to ascertain the motivations that propel an individual to give away his wealth (earned or inherited as the case may be) to others with no expectancy of monetary recovery. In this series, we take a look at some of the Indian millionaires who turned philanthropists and benefactors to the less privileged citizens.

The earliest name that comes to mind on this list is Jamnalal Bajaj. Born in 1889, Jamnalal wasn’t born to riches but actually into a poor Marwari family to Kaniram and Birdibai in a village in Rajasthan. Fate obviously had supplementary plans for him and he was adopted as a grandson by Seth Bachhraj, a wealthy merchant from Wardha, who was a distant relative. Jamnalal learnt the ways of the trading world as he grew up and got involved with the family business. He soon became adept at commerce and the significant but laborious task of bookkeeping. In 1926, post his grandfather’s demise, he founded what came to be known as the Bajaj Group of Industries.

He went on to establish Mahila Ashram at Wardha and Mahila Shiksha Sadan in Ajmer. These are the testament to his earnest efforts for the emancipation of women through education

Jamnalal was greatly influenced by and involved with the freedom movement during the British rule. He relinquished the titles of Honorary Magistrate and Rai Bahadur conferred upon him by the British without any care of incurring their ire. An ardent follower of Mahatma Gandhi, Jamnalal is said to have been adopted as his fifth son. The Bajaj Foundation relates his participation in the Non-co-operation Movement of 1921, the Nagpur Jhanda Satyagraha to uphold the honour of the National Flag in 1923, the Boycott of Simon Commission in 1929, the Salt Satyagraha in 1930, and the Anti-war campaign in 1941.

Jamnalal was a social reformer who lived by example and eliminated the practice of purdah in his own home. He opened the doors of his family temple to the Harijans, making it the first known temple in India to do so. This social awareness and sensitivity were certainly early altruistic signs of a man who actively participated in the freedom struggle. Jamnalal Bajaj was the Founder-President of the ‘Gandhi Seva Sangh’ and Chairman of the ‘All-India Khaddar Board’ and he undertook extensive khadi tours in Rajasthan as well as the entire country for the advancement of Khadi and village industries. He was also a pioneer in working for Gau-Seva (cow protection), the deliverance of the Dalits and the downtrodden, education of women and dissemination of the Hindi language.

He went on to establish Mahila Ashram at Wardha and Mahila Shiksha Sadan in Ajmer. These are the testament to his earnest efforts for the emancipation of women through education. Education is a field where the Bajaj name shines brightly to this day. This includes offering financial aid for coaching underprivileged children who aspire to join the IIT, promoting the education of girl child from scheduled castes and tribes in the Thane district and ensuring that they don’t drop out of school. The Bajaj Group is also involved in upgrading Industrial Training Institutes (ITI) in Pune, Pantnagar and Aurangabad and donates used machinery to facilitate enhanced training and job focus. The Group has funded the establishment of four Chair Professorships, the highest honour for faculty members for their contribution to research and teaching, at IIT Mumbai. The Bajaj Group’s altruistic involvement covers an entire gamut of sectors including Healthcare, Art, Culture, Sports and Spirituality.

Jamnalal Bajaj’s driving force appears to be his robust code of ethics, which he lived by and his belief in empowering the socially retrograde strata in India. His belief and adherence to the Gandhian principles permeated into every sphere of his life – personal, social, business as well as social. His legacy is being ably carried forward by the Bajaj family in their philanthropic endeavours amalgamated with their business pursuits. 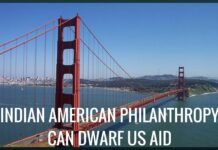 Philanthropy by Indian-Americans could dwarf US aid