[dropcap color=”#008040″ boxed=”yes” boxed_radius=”8px” class=”” id=””]R[/dropcap]obert Vadra, the controversial son-in-law of Congress President Sonia Gandhi, could breathe easy after the Haryna Government decided to grant a six-month extension to the one-man Judicial commission probing his alleged wrong-doing in the sale and purchase of Government lands in alleged cahoots with former Chief minister Bhupidner Singh Hooda and realty giant DLF. A formal decision is expected within the next 48 hours, though several Haryana ministers have said that the decision to give additional six months to Dhingra panel has already been taken. The term of Justice Dhingra commission ends on December 7.
The extension of the Judicial commission’s term will mean Vadra will have nothing to worry about in the immediate future.
In May, Khattar government appointed the one-man Commission of Inquiry to probe alleged irregularities in the grant of change of land use licenses by the Department of Town and Country Planning to some companies, including that of Vadra’s in Sector 83 of Gurgaon for developing commercial colonies.
[dropcap color=”#008040″ boxed=”yes” boxed_radius=”8px” class=”” id=””]T[/dropcap]he Government set up the Dhingra commission after a CAG report pointed to serious irregularities in Vadra’s various land deals. Earlier, Haryana’s senior IAS officer Ashok Khemka had also pointed several damning violation of government rules in these lands deals. In 2012, posted as Haryana Director General, Consolidation of Holdings, Khemka cancelled the mutation of 3.5 acres of land owned by the Vadra’s company in Sector 83, of which 2.7 acres was later sold to realty giant DLF.
The commission was initially asked to probe issuance of such land use licenses and “alleged ineligibility” of beneficiaries including Vadra’s firm M/s Sky Light Hospitality in Sector 83, Gurgaon. Later, the scope of the panel’s probe was expanded to cover four villages of Gurgaon-Sihi, Shikohpur, Sikanderpur and Kherki Daula – where residential sectors 36-A, 75, 75-A, 76, 77, 78, 79, 79-A, 79-B, 81, 81-A, 82, 83, 84 and 85 were raised.
The changed of land use agreement allowed Vadra to sell these lands to DLF at huge premiums. The DLF then developed residential properties…
[dropcap color=”#008040″ boxed=”yes” boxed_radius=”8px” class=”” id=””]T[/dropcap]he CAG report and Khemka‘s findinga should have been enough for the state government to register an FIR and book Vadra for criminal conspiracy. Instead, Chief Minister Manohar Lal Khattar appointed the judicial commission to go through the same findings all over again.
Experience of the past have shown that Judicial commissions go on for years and are primarily used to keep an issue on the back burner till it is conveniently forgotten. Without commenting on the sincerely of Justice Dhingra to complete the probe at the earliest, it is seen that procrastination is inherently built in functioning of such commissions. They have to issues notices and summons, and reissue them if people do not turn up for depositions. More often than not, such commissions carry forward the agenda of the Government and take their own sweet time in submitting their reports.
Take the example of Liberhan Commission of Inquiry that probed the destruction of the Babri Masjid in Ayodhya in 1992. Headed by retired High Court Judge M. S. Liberhan, the Commission was formed on 16 December 1992 by the Union Home ministry. The Commission was asked to submit its report within three months. But it got as many as 48 extensions and finally submitted its report in 2009, 17 years after its commissions, to the then Prime Minister Manmohan Singh in 2009.
[dropcap color=”#008040″ boxed=”yes” boxed_radius=”8px” class=”” id=””]A[/dropcap] fortnight ago, Chief Minister Manohar Lal Khattar claimed that the Dhingra commission would soon submit its report and the state government will take firm action on the basis of its recommendations. But Khattar’s claim seems far from reality. As of now, Vadra seems to have got a long rope. Time alone will tell whether the state government will allows Vadra to get away or tighten the noose. Of course much of it will depend on the political equation between the Congress and the BJP at the national level. 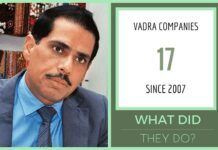 The curious case of Vadra companies 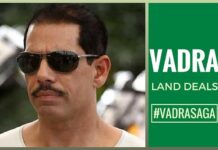 Anybody else in Vadra’s place would be…

Time for CBI to arrest Karti in Aircel-Maxis case