The National Stock Exchange of India Ltd. (NSE), which is embroiled in the Rs.60,000+ crores Colo-Algo scam, has told the Hon’ble Madras High Court that currently it has no plans to do an Initial Public Offering (IPO) and it has not filed any IPO papers with market regulator the Securities and Exchange Board of India (SEBI). SEBI also confirmed to the Court that it has not received any IPO application from the exchange. In its five-page order dated January 8, 2021, the Madras High Court added that “the undisputed position is that such permission has not been sought or granted.”

In a Public Interest Litigation (PIL) filed before the Madras High Court, an appeal was made to direct SEBI to withhold the proposed IPO of NSE till the completion of the multi-agency investigations and clarity emerges on the Rs 60,000+ crores Colo-Algo scam[1]. The CBI has filed an FIR on NSE scam and there is also an Income Tax raid on NSE and Colo-Algo beneficiaries and the related prosecutions are still going on[2]. Responding to the PIL, the regulator told the Court that no IPO of NSE “can be set in motion without the prior permission of SEBI.” Even NSE confirmed that “it has not obtained the clearance from SEBI as yet.”

More than five brokers are approaching their clients seeking bids for NSE shares via brochures and offer letters and have even mobilised their wealth management teams for pre-IPO placements.

Even though there is no IPO on the anvil, large brokerage firms like Motilal Oswal, IIFL, Anand Rathi, Analah Capital and JM Financial have aggressively marketed NSE shares between Rs.800 to Rs.1,500 per share in the grey market as a pre-IPO private placement. Even Norwest Venture Partners and SAIF Partners are also seeking to sell nearly 1.5 crore shares each at around Rs.1,300 a share[3].

Currently, more than five brokers are approaching their clients seeking bids for NSE shares via brochures and offer letters and have even mobilised their wealth management teams for pre-IPO placements. Such offers for placements are happening to thousands of investors without IPO approval, which is illegal. Secondary sale of shares is considered a deemed IPO when it is sold downwards to multiple buyers through offer paper, as in primary offerings. Any offer of securities by an unlisted company to more than 200 persons in India or abroad during a year to get securities listed on a stock exchange is deemed to be a public issue, as per Section 42 of the Companies Act, 2013 and attracts prosecution as in the case of Sahara, where SEBI declared such placements as null and void and initiated criminal actions.

SEBI should investigate whether NSE was in the know of these private placements and should declare such share sale null and void and punish all the brokers involved. SEBI must probe how NSE’s shares are being sold to many gullible investors without the regulator’s stamp of approval for a public issue in violation of private placements, similar to Sahara private placement crimes.

P Chidambaram along with his C-Company members are getting richer by Rs.25,000 crores through NSE IPO

Former Finance Minister P Chidambaram and his C-Company, who have already made more than Rs.60,000 crores in the NSE colocation scam and siphoned it abroad, own by benami (proxy) up to 40 percent stake in NSE through Mauritius based FIIs. Chidambaram’s cabal, which includes former Additional Secretary of Ministry of Finance K P Krishnan, former NSE Chairman Ravi Narain, former NSE CEO Chitra Ramkrishna, Ajay Shah and Susan Thomas, are liquidating their benami (proxy) holdings through the sale of NSE shares expecting to get richer by Rs.25,000 crores. SEBI should investigate the ultimate beneficial owner of the portfolio holdings of these foreign investors. Currently, the CBI is also probing the NSE scandal.

In the Colo-Algo and the high-frequency trading scandals, NSE had provided undue gains to a group of brokers by extending them unfair and preferential access ahead of other investors by gaming the system. This was a clear case of criminal violation because it violated the base condition of fair and equitable price discovery which resulted in over Rs.60,000 crores gains to a select cartel.

Even after SEBI’s investigations highlighted serious violations at the exchange, the regulator followed a `kid-glove approach’ by not imposing any operational restrictions on the exchange. The regulator took four years just to impose a paltry fine and issue show-cause notices to 14 bourse officials. NSE had earned substantial revenue just as rent from its colocation facility and profits made by the cartel runs into Rs.6,000+ crores and SEBI had asked NSE to set aside Rs.4,000 crores generated as rent from this facility till June 2020. SEBI’s Technical Advisory Committee (TAC) and the Deloitte report have also revealed huge violations and crime by NSE, to the extent that it was also stated in Parliament that Colo-Algo scam has compromised the integrity of the Indian Financial System.

To add to this, the Delhi High Court is hearing a PIL on March 4 related to an expose of the NSE Colo-Algo scam highlighted in the recent book ‘The Market Mafia’. Without any regulatory investigation of these FIIs, Chidambaram will be allowed to get away with liquidating his Benami assets in NSE, something he had previously done by selling all his Benami (proxy) holdings in Banking, Financial Services, Insurance (BFSI) companies[4]. 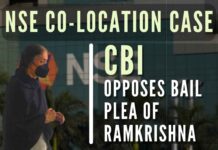