The preliminary findings of a DNA study of the skeletal remains of Rakhigarhi dated at 6000 years BP and reported in Economic Times on 13th June 2018 reveal that there was no trace of Central Asian ancestry. Mr. Vasant Shinde, one of the authors of the study says, “This indicates quite clearly, through archeological data, that the Vedic era that followed was a fully indigenous period with some external contact.”

Another author, Mr. Neeraj Rai who did the DNA study says that the findings point to “greater continuity rather than to a new Aryan race descending and bringing superior knowledge systems to the region.”

It is amusing to read this reaction with many pitfalls contained.

While these are on expected lines concurring with the indigenous history of ancient India as known from the Itihasas, it is necessary to know the reaction from the other side of the fence. One of the prominent proponents of Aryan Invasion Theory, Mr. Witzel had reacted to this news in one of the group-forums as follows:

“.. “proving” the same: ancient DNA (just 2 persons) from the Indus site of Rakhigarhi, long bandied about, now is said to show that their DNA was *not* that of “invading Aryans.”

Of course, in a Harappan site, we would not expect W. Central Asian (Indo-Aryan) DNA, as the recent paper by Vagheesh et al. indicated: the *speakers* of Indo-Aryan entered the subcontinent only in the LATE Bronze Age: as evidence from Swat indicates.

For a nationalist/Hindutva person that does not matter, of course, as they wrongly maintain that the Harappan population was “Aryan” anyhow.
Problem solved, LOL.”

It is amusing to read this reaction with many pitfalls contained. Let me discuss them one by one.

At the outset, he seems to take a dig at the number of samples taken for the study. The samples were taken from just two persons. Can any conclusive word be given on a well-oiled theory like the AIT, from just 2 specimens?

“Indus Periphery-related people are the single most important source of ancestry in South Asia.”

Why not? If 92 scientists (Vagheesh M.Narasimhan and others /Narasimhan et al) can justify Aryan Invasion or rather, the movement of Indo-Aryan speakers to India on the basis of *zero* samples from the Indus region, the Shinde-Rai pair sounds more reliable when they made their claim on *just* 2 samples.

Thankfully, Narasimhan et al adhered to academic integrity by conceding that they have no “access to any DNA directly sampled from the Indus Valley Civilization (IVC)”, but built up a hypothesis of an ancestry to IVC from outside Indus (Indus Periphery). In their own words,

“Without ancient DNA from individuals buried in IVC cultural contexts, we cannot rule out the possibility that the group represented by these outlier individuals, which we call Indus_Periphery, was limited to the northern fringe and not representative of the ancestry of the entire Indus Valley Civilization population.” (lines 293-295)

“Indus Periphery-related people are the single most important source of ancestry in South Asia.” (Abstract)

Contrast this with the findings of Shinde-Rai which is based on the genetic material extracted from 2 specimens, found in a core IVC location from a layer of 6000 years BP and arriving at a conclusion that it is predominantly a local element and did not contain any central Asian genetic element. This is not a hypothesis but a finding. Can we say the same for the conclusion of Narasimhan et al? Theirs is a hypothesis – a ‘possibility’.

Perhaps in realisation of this fact, Mr. Witzel switches over to finding an excuse for the absence of the Central Asian element in the genetic material of Rakhigarhi specimen.  He expresses in the next line of his comment that he doesn’t expect Central Asian gene in any Harappan site, meaning to say that they would appear in the genetic make-up only after the Aryan Invasion had started – i.e., from the middle of the 2nd millennium BCE. To support this he quotes the paper by Narasimhan et al on Swat-evidences. But then the Swat evidence speaks about an admixture of Iranian-agriculturists and South Asian hunter-gatherers (AASI) in 4700- 3000 BCE in outliers of BMAC and eastern Iran that was genetically similar to post-IVC groups of Swat region thousand years later (1200-800 BCE). This group is favoured by Narasimhan et al as forming “the single most important source of ancestry in South Asia.”

The fact of the matter is that there is NO central Asian ancestry in this group claimed by Mr. Witzel as evidence from Swat (on subsequent Aryan Invasion). The admixture in Indus periphery / Swat is made of 58% – 86% of Iranian agriculturists related ancestry with “little Anatolian agriculturist related admixture” and 14%-42% AASI ancestry. On the other hand Shinde-Rai study shows minor traces of Iranian strains in Rakhigarhi which, going by the time period of the specimens, would be ancestral to Iranian genetic presence in Indus Periphery. In lay terms this means out of India movement of Iranian strains which however have to be corroborated by the exact strains found out in the study and made known once the paper is published. 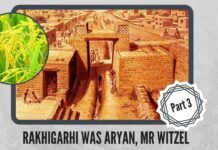