The PFI has put out “rate cards” for women in Tamil Nadu and Kerala, wherein Muslim men get paid certain amounts to make Hindu women “fall in love” with them. In several cases, it has been found out that PFI was involved in kidnapping several women and converting them to Islam. It was also learnt that PFI is now supplying Indian women as sex slaves to ISIS.

The case of Shruti and posters all across Kerala

Recently, the PFI became enraged after one of their kidnapping attempts was foiled. PFI had made an attempt to kidnap one Shruti form Kannore. However, their efforts failed when the parents of Shruti contacted the Hindu helpline run by Praveen Togadia. Members of Hindu helpline along with the police were able to rescue Shruti from a few PFI men.

However, after this incident, PFI put up posters all across Kerala, giving an open challenge to the police that they will be kidnapping Shruti, and the police can try and do whatever they wanted to. The below image was shot in Kannore where this poster is now to be seen in several areas:

A raw translation of the poster would read as follows:

“Dear spineless Police,
Which bows down to Sanghi forces,
we have decided to take Shruti.
We will take her to Syria or Yemen
and gift her to ISIS.
Do what you can,
let us see if you can stop us!”
-Popular Front of India

The PFI has become a menace to Hindu existence. Now since they have openly declared their allegiance to ISIS we make a sincere appeal to the Central and Kerala Governments to take immediate action to curb this anti-India organisation. The below video shows an “army” which they formed to battle India. 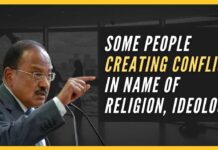 Are your afraid of Friday the 13th?