[dropcap color=”#008040″ boxed=”yes” boxed_radius=”8px” class=”” id=””]Q[/dropcap]The slugfest between Rahul Gandhi and Subramanian Swamy intensified on Thursday with the Congress Vice-President daring the Modi government to order a probe into his citizen controversy and the BJP leader alleging that the mother-son (Rahul-Sonia) duo has stashed $40 billion in their multiple accounts abroad. Congress president Sonia Gandhi also jumped to her son’s defence as she accused the Modi government of pursuing `communal and divisive politics’.
Swamy on Monday had claimed that Rahul had declared himself a British citizen in the registration papers of a private company in London. The BJP leader demanded that Gandhi should be stripped of Indian citizenship and wrote to Prime Minister Narendra Modi and Lok Sabha Speaker Sumitra Mahajan in this regard.
Rahul’s personal challenge to Prime Minister and his taunt that the PM must order a probe if has a 56-inch chest has created a piquant situation for the Government. If Modi orders a probe and the charges are not proved then the Congress will forever accuse the Modi government of indulging in vendetta politics. On the other hand, if Modi did not order a probe, then Rahul can get away by saying the charges were “malicious and fabricated”.
“You talk of a 56-inch chest. Probe me, then put me behind bars. I want to tell Modi ji and the RSS that I do not have the slightest of fear,” Rahul said,
“Modi ji, it is your government. You have the agencies. Get a probe done against me within 6 months and send me behind bars if you find something. Stop all this – the mud that you throw at me and my family through your cronies. You are not in opposition, you are in government now,” Rahul said while addressing a National Convention of the Youth Congress on the occasion of 98th birth anniversary of Indira Gandhi.
[dropcap color=”#008040″ boxed=”yes” boxed_radius=”8px” class=”” id=””]W[/dropcap]ithout naming Swamy, Rahul accused the PM of using his “cronies” to “throw mud” at him the way the RSS and BJP did against his parents and Grandmother Indira Gandhi in the past. “Ever since I was a child, I have been watching people from RSS and BJP throwing mud at my grandmother, my father and even my mother. I want to say one thing. There is not even an iota of truth in them.”
Asserting that he was unfazed by Swamy’s charges, Rahul said he will continue to attack the Government’s anti-people policies and pointed out that with just 44 MPs in parliament the congress was able to force the government to take back the land acquisition bill.
On her part, Sonia accused the government of “systematically working to dismantle the legacy of the Congress”.
“Today, when we see the ruling establishment pursuing communal and divisive politics and follow policies that favour the few and the powerful, when we see their ideology that shuns secularism, tolerance and inclusion, when the spokespersons of its agenda make blatantly partisan appeals to obtain votes, Indira-ji’s values acquire even greater importance,” Sonia Gandhi said.
[dropcap color=”#008040″ boxed=”yes” boxed_radius=”8px” class=”” id=””]S[/dropcap]onia also attacked the RSS, saying the “present government and its masters who exercise their control from behind the scenes, are systematically working to dismantle the legacy of the Congress, to rewrite our history, to negate all that Nehru, Indira-ji and all our leaders have achieved”.
But Swamy continued to keep the pot boiling by sticking to his charge that Rahul was a British national who ran a shell company for defence kickbacks.
“I have traced Backops as a shell firm to companies receiving kickbacks in Indian defence deals’ illegal commission,” Swamy tweeted. Talking to reporters in Ahmedabad, Dr. Swamy alleged that Rahul and Sonia have stashed $40 billion in their foreign accounts.
“The amount is in Indian rupees is nearly ₹2,50,000 crores ($37.8 billion). It is more than India’s Annual Income Tax collection,” Swamy alleged.
Calling Rahul a ‘commission agent’, Swamy said his letter to the Prime Minister contained sufficient evidence for a probe by the CBI or the Enforcement Directorate against Rahul and his associates.
“The web of these companies was created in lines with Bofors scam, he said, adding, “He (Rahul) has nothing to do with politics. His prime objective is to be in commission business through defence deals.”
[dropcap color=”#008040″ boxed=”yes” boxed_radius=”8px” class=”” id=””]S[/dropcap]wamy pointed out that as a Member of Parliament, Rahul cannot earn foreign currency or run any business abroad without prior regulatory approvals.
Below is a copy of the contents revealed in the Press Conference of Dr. Subramanian Swamy in Ahmedabad on Nov 19. You can get a downloadable copy of the contents here. Note that Backops is mis-spelled as Blackops in some places in the document. 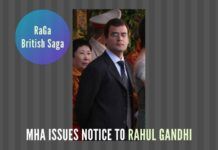