[dropcap color=”#008040″ boxed=”yes” boxed_radius=”8px” class=”” id=””]I[/dropcap]n what may result in ‘One Rank One Pension’ (OROP) for all, the 7th Pay Commission on Thursday recommended a revised pension formulation for employees of civil government, Central Armed Police Forces, as well as defence personnel to bring “parity between past pensioners and current retirees with same length of service”, retiring before January 1 next year.
It, however, refrained from using the term OROP for it.
“The Commission recommends a revised pension formulation for civil employees including CAPF personnel as well as for Defence personnel, who have retired before 01.01.2016,” an official statement said after the 7th Pay Commission submitted its recommendations to the finance ministry.
“This formulation will bring about parity between past pensioners and current retirees for the same length of service in the pay scale at the time of retirement,” it read.
“The past pensioners shall first be fixed in the pay matrix being recommended by the Commission on the basis of pay band and grade pay at which they retired, at the minimum of the corresponding level in the pay matrix.
“This amount shall be raised to arrive at the notional pay of retirees, by adding number of increments he/she had earned in that level while in service at the rate of 3 percent,” it said.
The statement further said: “In the case of defence forces personnel, this amount will include military service pay as admissible.”
This comes after the defence ministry announced OROP for defence personnel, which was dismissed by protesting veterans.
Retired personnel of CAPFs also staged a protest at Jantar Mantar recently demanding OROP.
[dropcap color=”#008040″ boxed=”yes” boxed_radius=”8px” class=”” id=””]A[/dropcap]n agitation by veterans, who called the defence ministry’s scheme ‘one rank five pension’ continues at Jantar Mantar in the national capital and in several other cities across the country. Col. Anil Kaul (retired), spokesperson of the Indian Ex-Servicemen Movement (IESM), said the question was not of “parity” but that the armed forces must have an edge over others.
“Go ahead and give OROP to all… The question is not of parity, armed forces must retain its edge,” Col. Kaul said.
“Increase the pension for armed forces to 90 percent (of last salary) for the JCOs and ORs and 70 percent to officers,” the veteran said.
The ‘Military Service Pay’, which is a compensation for the various aspects of military service, was recommended to be doubled, and the panel also suggested that Short Service Commissioned Officers should be allowed to exit the Armed Forces at any point in time between 7 and 10 years of service.
For a serving officer, the MSP has been recommended to be increased from present Rs.6,000 to Rs.15,500.
It also recommended that the allowances relating to risk and hardship shall be governed by the newly proposed nine-cell risk and hardship matrix.
The commission also suggested increasing current monthly Siachen allowance from present the Rs.21,000 to Rs.31,500 for service officers and Rs.21,000 from the present Rs.14,000 for JCOs and ORs. 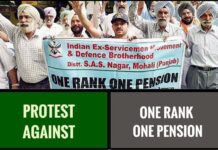