The Bombay High Court on Monday directed the Income Tax department not to take any coercive action against Reliance Group Chairman Anil Ambani till November 17 on a show cause notice issued to him seeking to prosecute him under the Black Money Act. Income Tax catches Anil Ambani for Rs.420 crore tax evasion on undisclosed funds worth more than Rs.814 crore held in two Swiss bank accounts.

According to the IT department’s notice, Ambani was an “economic contributor as well as beneficial owner” of a Bahamas-based entity called ‘Diamond Trust‘ and another company called Northern Atlantic Trading Unlimited (NATU) which was incorporated in the British Virgin Islands (BVI). The I-T department had issued the notice to Ambani on August 8, 2022, for evading Rs.420 crore in taxes The department has charged Ambani with “wilful” evasion, saying he “intentionally” did not disclose his foreign bank account details and financial interests to Indian tax authorities.

As per the department’s notice, Ambani was liable to be prosecuted under Sections 50 and 51 of the Black Money (undisclosed foreign income and assets) Imposition of Tax Act of 2015 which stipulates a maximum punishment of 10 years imprisonment with a fine.

Anil Ambani (63) earlier this month approached the HC challenging the notice, claiming that the Black Money Act was enacted in 2015 and the alleged transactions are of assessment years 2006-2007 and 2010-2011. Senior counsel Rafique Dada, appearing for Ambani, said provisions of the Act cannot have a retrospective effect. Advocate Akhileshwar Sharma, appearing for the I-T department, sought time to respond to the petition. A division bench of Justices S V Gangapurwala and R N Laddha permitted the same and posted the petition for hearing on November 17.

“The Income Tax department shall till the next date not take any coercive action against the petitioner (Ambani) in pursuance to the show cause notice,” the Court said. It also directed the I-T department to respond to Ambani’s contention that provisions of the Black Money Act may not have a retrospective effect.

As per the tax notice, Anil Ambani “failed to disclose” these foreign assets in his income tax return (ITR) filings and hence contravened the provisions of the Black Money Act. The total value of the undisclosed funds in the two accounts has been assessed by tax officials at Rs.8,14,27,95,784 (Rs.814 crore) and tax payable on this amount at Rs.4,20,29,04,040 (Rs.420 crore).

For the past seven years, younger Ambani is facing a big debt trap and a lot of loan dues to Indian banks and Chinese banks. Chinese banks have already approached a London Court for more than Rs.54000 crore dues for non-payment of loans to install Chinese equipment in the Indian telecom and power sector. The London Court already directed Ambani to $700 million and the debt-ridden industrialist claimed about his inability to pay. Later Chinee firms approached Delhi High Court to retrieve the debts[1] 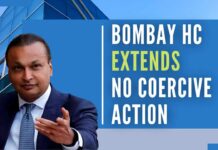