Congress President Sonia Gandhi has come out with an obnoxious demand of a complete ban of Central Government’s advertisements in all media including Print, Television, and Online platforms for two years in the wake of the Corona crisis. In a letter to Prime Minister Narendra Modi, she urged this as the first demand saying that by this ban on advertisements Central Government can save Rs.1250 crores per year. That works out to Rs.2500 crores in two years.

While making this atrocious demand, we must remember that Sonia Gandhi has captured the Congress party’s newspaper – ‘National Herald’ and is holding more than Rs.5000 crores-worth land and building assets across the country including in plush locations in Delhi, Mumbai, Lucknow, Panchkula, and Indore. National Herald newspaper was started in 1938 by Congress leaders under a public limited company – Associated Journals Ltd (AJL) – and after India’s independence, many Governments allotted huge benefits including lands across the country. Sonia Gandhi was interested only in the newspaper’s huge land assets and closed down the newspaper publishing in 2008. By the end of 2010, she dubiously formed a private company (76% of shares owned by Sonia and son Rahul) named as Young Indian and grabbed 99.3% shares of AJL.

Now she is facing criminal charges in the National Herald grabbing case filed by BJP leader Subramanian Swamy and Income Tax charges for tax evasion as well. The Government has also ordered the eviction of its headquarters (Herald House) in Delhi worth around Rs.1000 crores. The Income Tax case and eviction case is now pending before the Supreme Court after Sonia Gandhi lost the cases in all lower courts. The Central Bureau of Investigation (CBI) and the Enforcement Directorate (ED) have also filed cases against Congress leaders in the Panchkula land grabbing case.

If Sonia Gandhi is so concerned about India’s financial position, she must surrender all the lands worth more than Rs.5000 crores belonging to the erstwhile newspaper National Herald company to the Government of India.

The News Broadcasters Association (NBA) on Tuesday “strongly deplored” Congress President Sonia Gandhi’s suggestion of complete ban of Central Government advertisement in all sorts of media including print, television and online for two years to tackle the financial crisis due to Corona crisis. In a statement, the NBA President Rajat Sharma said that Sonia’s statement was demoralising and asked for the withdrawal of the statement.

“At a time when media personnel without fearing for their lives are doing their national duty by disseminating news on the pandemic, a statement like this from the Congress is highly demoralising. NBA calls upon Congress President Sonia Gandhi to withdraw her suggestions made to Prime Minister on a complete ban on media advertisements for two years in the interest of a healthy and free media,” said Sharma.

Practice what you preach

Why is Sonia Gandhi not asking the Congress-ruled states to stop their advertisement in media? Her cunning idea is to limit the publication of Prime Minister Narendra Modi’s photo published in the Central Government advertisements. Some media-friendly Congress leaders accuse former Minister Jairam Ramesh of giving this “brilliant(!) idea” of scrapping Central Government advertisements. It is an open secret that penning erudite prose is beyond the capabilities of the Sonia/ RaGa/ PriVa trio. So, it must have been written by someone and just signed by Sonia.

Her other four demands were the suspension of construction of the Rs.20,000 crores-worth Central Vista Project, ban on Modi and other Minister’s foreign visits, 30% cut in Government expenses and transfer PM-CARES funds to PMNRF. These demands expose her hatred towards Modi. Why she wants Modi to not travel abroad is a mystery. These things expose the pettiness of and the cunning nature of Sonia Gandhi.

Let me reiterate – Sonia must surrender the more than Rs.5000 crores-worth assets of erstwhile National Herald newspaper grabbed by her instead of calling for a complete ban on Central Government’s advertisements in media for two years.  If Sonia is so concerned about India, she should pay back the Rs.414 crores illegal gain (findings of Income Tax in 2018) from grabbing the assets of the National Herald newspaper[1]. The Italian born Sonia, the land where the word fascism originated has shown her true colors. 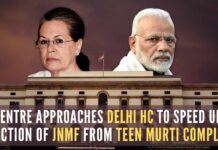