Giving a surprise to Congress lawyers, BJP leader Subramanian Swamy started his counter-arguments in the National Herald case tweeting controversy by demanding authentication of his more than 2000 tweets submitted by the accused leaders. “You have demanded authenticated or certified copy when I submitted the copy of Income Tax Orders against you. You people even demanded when I submitted the copy of Sonia’s Gandhi’s affidavit in Supreme Court served to me. That time you demanded me to comply with the provisions of Evidence Act. Now you must also adhere to those provisions of Evidence Act.

“I don’t know you have committed perjury or changes in my 2000 tweets photocopy produced by you. So you must also get authentication from the Twitter,” said Swamy starting his counter-arguments, seeking dismissal of the petition filed by accused Motilal Vora, seeking to restrain tweeting about National Herald case matters.

This argument of Swamy has confused the Congress lawyers as there are no prescribed rules on how to authenticate a tweet. Swamy did not agree to Congress lawyers suggestions on proof on downloading. As Twitter is a US-based firm, the real authentication has to come from US Department of Justice, says legal experts, adding that this is still a grey area in Indian laws.

Putting an end to the criss-cross arguments, Additional Chief Magistrate Samar Vishal asked Swamy to continue his arguments on the merits of the petition filed by Congress leaders. “They assume, TDK and Buddhu, I meant is about Sonia and Rahul. I have no objection on that and let them assume whatever it is. I am making comments on social media and nothing to do with obstruction of justice in this case. Have I said against the honourable and learned Judge? Their arguments that I interfere in the administration of justice or sub judice and all are totally wrong,” said Swamy reiterating the dismissal of “frivolous” petition.

The Congress lawyers also objected to Swamy’s mentioning in Twitter as “Congi Lawyers”. “What do you mean by Congi?” asked agitated lead lawyer RS Cheema. Ridiculing Congress lawyers, Swamy said he described them as Congi lawyers as they represent Congress (Indira) faction leaders. “It is my opinion”.

“We have not called you Sanghi complainant. We are professionals. We don’t belong to a party,” said Cheema.  “There are a lot of Congress factions. I, O, S, A. In short form these people are known as Congi and as you represent them, you are known as Congi lawyers,” Swamy retorted, reiterating Congi is a not a defamatory word. He also produced various judgments upholding freedom of expression, seeking dismissal of the petition of Congress leaders.

Putting an end to the heated exchanges, the Judge reserved for Orders on this regard on November 17. He also said that the crossing of Swamy by Congress lawyers in the main case will also start on November 17, as the earlier fixed day October 27 is a holiday.

“You (Swamy) will enjoy when you are in the cross, you’ll see the real Cheema that day,” said Advocate  Cheema, while the Judge pronouncing the next day hearing. 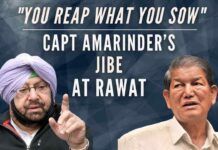