The Department of Telecom (DoT) on Monday informed the Supreme Court that leading private telecom firms like Bharti Airtel, Vodafone, and state-owned MTNL and BSNL have pending license fees outstanding of over Rs.92,000 crores till date.  DoT filed the affidavit of huge dues to the apex court in a case related to telecom firms and Telecom Tribunal.


As per the New Telecom Policy, telecom operators are required to share a percentage of their Adjusted Gross Revenue (AGR) with the government as an annual License Fee (LF).  In addition, mobile telephone operators were also required to pay Spectrum Usage Charges (SUC) for the use of radiofrequency spectrum allotted to them.

In 2016, the Comptroller and Auditor General (CAG) had caught six telecom companies for not paying and hushing up more than Rs.45000 crores to the public exchequer. The telecom firms’ fraud was caught by the auditing agency after inspecting their revenues during the period 2006 to 2010. After the 2G Scam, the CAG decided to audit the revenue of all telecom companies as they are mandated to share a portion of revenue to Government as per licensing agreement.  All Telecom companies approached Delhi High Court and Supreme Court to prevent CAG from auditing them and lost the case.

The  CAG report was tabled in the Parliament on March 11, 2016. Recommending the government to check the revenues of telecom companies from 1999, the CAG in its report exposed that from 2006 to 2010, six major operators had under- invoiced Rs.46045.75 crores resulting in a tax loss of Rs.12488.93 crores to the exchequer. The apex auditor caught Airtel, Tata, Reliance Communications, Idea, Vodafone and Aircel for hushing up their revenues to evade mandatory remitting of a portion of the revenue to the Government, which was collected from people.

These incidents clearly show that private majors are misers when it comes to paying tax to the Government, even after collecting the money from the public. 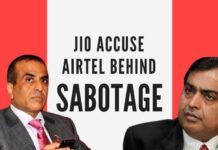 PGurus in conversation with Nandini Ramani, Vice President at Twitter