Value of a currency is its power to purchase goods and depends upon its quantity relative to the total goods produced in the country. If goods produced are constant, and quantity of currency is increased (by printing it), its value will decline, that is, goods will become costlier as same denomination currency notes will be able to buy fewer goods now. This is called general inflation. महँगाई। (prices of individual goods may increase or decrease depending upon demand-supply mismatch specific to goods also.)

What happens when people in the two countries are buying and selling goods to each other?

If an American wants to buy something from India, he would need rupees. He may buy these rupees from an exporter in America who may have chosen to receive the price of his export to India in rupees, or from the open currency markets. If rupees are not available to him, he may buy gold in America and pay his Indian seller in gold. So how many rupees he will get by selling one American dollar? That will depend only on two things: what those rupees can buy in India, and what that one dollar can buy in America. Or say in a third country, what a rupee can buy and what a dollar can buy. If there are no restrictions on the movement of gold across national boundaries, then the price of gold in America in dollar and price of gold in India in rupees will straight away give the exchange rate.

Hawala is the mechanism to beat the government-controlled exchange rate.

Secondly, suppose it holds the rate down. That is, instead of 70 rupees a dollar (real market rate) it wants to keep it 35 rupees a dollar. To the exporter, it will give only 35 rupees for each of his dollars, stealing from him 35 rupees. Soon he will go out of business. To the importer, it will give two dollars for every 70 rupees he gives to the government to buy the dollars, enriching him. But this extra dollar will come from exporters, so importers will be enriched at the expense of exporters. But since exporters in this scenario are dying, the government will have less and fewer dollars to give away to importers, and favouritism and bribe market would grow like anything. Rationing will be even tighter. Finally, govt may have to buy dollars by selling its gold abroad and giving them cheap to importers. That is, it will be selling its gold to enrich importers in India. That is, the collective stock of gold in the country will be sold abroad to enrich the few (the importers).

What if the government takes its decreed rate higher than the real rate, say Rs 100 a dollar instead of present rupees 70 a dollar? To the exporters it will give 30 rupees extra for every dollar they earn, enriching them. To the importers, it will charge 30 rupees extra, impoverishing them (they will need to spend 100 rupees for each dollar instead of 70 rupees). Soon the imports will decline. So from where will government than bring rupees to buy dollars from the exporters? It will have to buy them in exchange for its gold. So when government artificially jacks up exports by keeping the dollar price of its currency low, in the long run, it can do so only by selling country’s gold to its own people. If it instead uses tax money to buy a dollar for 100 rupees apiece from the exporters, it is simply transferring tax money to the exporters. Enriching them at the expense of taxpayers.

This is the whole story man, which they don’t teach you at Harvard, and media and economists don’t tell you because they are on the payroll of those who benefit from govt control, that is, the licensed importers/exporters.

(So what is hawala? Hawala is the mechanism to beat the government-controlled exchange rate. Suppose the exchange rate is government-controlled. So dollars will have to be rationed. You want to go abroad for, say, treatment. The babu decides he will give you only 1000 dollars. You give him 35000 rupees and get your 1000 dollars (in the first scenario above). But you need 2000 dollars. So you go and buy balance 1000 dollars from the black market. But he doesn’t give you 1000 dollars here. He charges you 75000 rupees (70 rupees per dollar real rate, 5 rupees his commission) and takes from you rupees 75000 here in India, and gives you a chit and an address in New York. You land in New York and go to that address, produce the chit, and lo, you get your 1000 dollars. हवाला हो गया। (from where do the 1000 dollars in New York come? From the exporter who left those dollars there, instead of bringing them back to India and surrendering to the government for rupees 35000. He gets his 70000 rupees from the Hawala operator, who pockets his 5000 rupees. As I always tell you, but you never listen, government control of the economy will always corrupt the citizenry.)

So what does it all mean? It means only one thing. What if we want to buy something from America, we will first need to export to America something of similar value. In the short run, we may borrow dollars, but even they will have to be repaid, with interest added. So, in the long run, we can never import more than we export. And in the long run, the Leftists may be dead, but the country remains, and the country is left holding the debt, the debt that is Leftists’ stupidity converted into hard currency (at the real rate, not government decreed rate of stupidity per kg.).

Therefore, the government’s control of the currency exchange rate is meaningless. If we are not exporting, we can not import. COME WHAT MAY. If without exporting, the government is importing something or giving dollars to importers, it is doing only by either of two means: either it is selling gold, or it is borrowing dollars. Neither can be continued for long. Even if the Leftists are all dead. 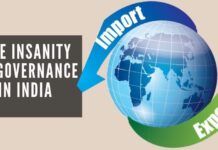 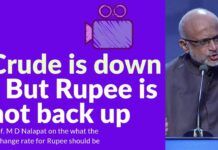 Run On The Rupee And The Remedial Steps

How Islam makes soldiers of the faithful by toughening them