Fadnavis isn’t doing anything to fulfil any of his promises

Over 6000 acres of salt pan land, 16 hectares of Mahim nature park and 33 hectares of Aarey Colony.CM Devendra Fadnavis’ greed for land in Mumbai appears to be endless. He makes Sharad Pawar look like a boy scout. This man from Nagpur is positively dangerous to Mumbai.

Thousands of acres of salt pan land are being opened up for “development” under the guise of “affordable housing.” These salt pan lands act as balancing chambers soaking up excess rainwater and preventing floods in the metropolis. Expert after expert has warned against the so-called development of these lands. But Fadnavis doesn’t care a damn. Since MHADA is the very definition of failure, the land will be given to builders. For the past few years, a cabal of big builders has been eyeing these vast land parcels. On the eve of the last assembly polls, a deal was almost struck with the then Cong-NCP government. But the later chickened out at the last moment fearing public outrage. But Fadnavis doesn’t have any such qualms. He is busy hastening the destruction of Mumbai.Mahim Nature Park is one of the few innovative projects wherein a garbage dump was converted into a much-needed green lung. A report in today’s Mumbai Mirror (April 11)  confirms that the park will be included in neighbouring Dharavi’s redevelopment.

Maharashtra has one of the most corrupt and cussed administrations in India. Farmer Dharma Patil even committed suicide at the gates of Mantralaya

As for Aarey, Fadnavis has gone out of his way to destroy this green Colony. Even though the original plan was to have the Metro car shed in Colaba, the CM has ensured that it is relocated in Aarey Colony which entails the felling of at least 3,000 trees. The damage to Mumbai’s ecology will be permanent. But then who cares.

Fadnavis isn’t doing anything to fulfil any of his promises. As opposition leader, he had promised to put behind bars NCP leaders responsible for the Rs 90,000-Cr irrigation scam. He hasn’t moved an inch against the masterminds behind the “sinchan ghotala.” In fact, he was pulled up by the Bombay High Court for sitting on his haunches for 39 long months on this issue which is so very crucial to Maharashtra.

As opposition leader, Fadnavis had targeted Congress leader Kripashankar Singh who was accused of humungous corruption. But the home department under Phadnavis persisted with the probe against Singh under the Prevention of Corruption Act fully knowing that it would not stand legal scrutiny without the Speaker’s sanction. Finally, the case against Singh was expectedly thrown out of the window by the courts.

Maharashtra has one of the most corrupt and cussed administrations in India. Farmer Dharma Patil even committed suicide at the gates of Mantralaya. The MIDC police are going out of its way to deny justice to a couple whose 3 years old daughter was sexually assaulted by a school trustee. Education minister Vinod Tawde is giving Best School award to Rustam Kerawalla of Vibgyor School who was arrested in connection with a child rape case and is currently out on bail. Such examples can be multiplied.  There is a limit to insensitivity..No?

Financially the state is in a mess with its public debt crossing Rs 4 lakh crores. But, the Nero from Nagpur couldn’t care less. 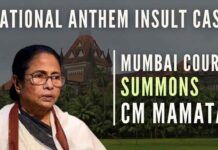