With several new video evidence emerging from Tirupati, it seems there are still many crypto Christians working in the departments affiliated with Tirumala Tirupati Devasthanams (TTD). In these new videos, we can see employees named Ms. Soubhagyam and Ms. Sujatha going to a church. Ms. Soubhagyam works as a staff nurse in Srinivasam Complex (Managed by TTD) and Ms Sujatha works as the Head of the Department, Padmavathi Women’s college, Tirupathi. In another video, we can see a TTD vehicle parked inside the church premises in Tirupathi.  A few months ago similar incident came to light exposing the Christians who acquired jobs in TTD in SC/ST quota.

Deputy Executive Officer, Ms. Hemalatha got caught while she was attending a Church Prayer using TTD Official Vehicle. Surprisingly, all Christian groups and Communist parties jumped in to protect her. There was a huge protest lodged by CPI(M) demanding ‘Job Security’ for minorities who currently work in TTD, and till now there is no action against her. CPI(M) also wants to distribute temple lands to the poor farmers but they never demand the same from Church lands do and Waqf lands. We all know that Church is the biggest landowner in India, but CPI conveniently forgot that fact.

After the Hemalatha incident, TTD had identified nearly 40 non-Hindu employees working in its institution, and issued a show-cause notice to them. After receiving the notice, these 40 employees jointly approached High-Court requesting to allow them to work in TTD. Finally, the High Court of Hyderabad issued a stay notice, allowing them to continue in their respective duties until its further proceedings.

After receiving backlash from Hindu groups such as Hindu Chaitanya Samithi, TTD had sought all their employees to give a written statement (declaration) about their religious inclination. Despite submitting such declaration, Ms. Soubhagyam, Ms. Sujatha now got caught going to Church. It will be interesting to see the response of the Government of  Andhra Pradesh with this new video evidence of crypto-Christians working in TTD.

Since Telugu Desam Party came into power in 2014 several famous Hindu temples in Vijayawada were demolished and there are ongoing preparations to demolish 10 more Hindu temples in Tenali, Guntur district. It seems Mr. Chandrababu Naidu does not care about Hindus and he seems to follow the same route as Congress in minority appeasement. TTD is a Hindu Dharmic organisation, there is no place for communists or people from any other religion in Hindu Dharmic place.  Andhra endowments department is filled with Christians, where corruption takes place at a large scale. In Nov 2017 Anti-Corruption Bureau seized several hundred crores worth of assets from Mr. Medepalli Vijayaraju who was Joint Secretary, Endowment Department in the AP Government[1].

It seems that the Tirumala Tirupathi Devasthanam is being monetarily exploited at various stages systematically. The local newspapers reported that the Chief Minister of Andhra Pradesh, Mr. N Chandra Babu Naidu wants to use temple money[2] to fulfill his Electoral Promises made in the year 2014.

Hindus are donating the money for Hindu Dharma Prachar, and for the maintenance of temples, but most of this money is diverted to the common good fund, and subsequently used for secular purposes. It is a well-known fact that several Hindu temples in Andhra Pradesh disappeared in the last 10 years and Crores of Temple money and temple lands were misused. The Chandra Babu Naidu’s administrations seem to be taking Hindus for a ride, and the minority appeasement is hitting the highest level at the cost of Hindus. 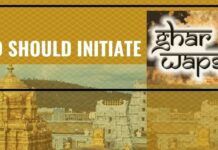