Let us recap what happened so far… SME (Small and Medium Enterprise) exporters were sold exotic derivatives as a panacea for their currency exchange woes. Initial success spurred them to start using exotic derivatives to speculate rather than hedge the currency they were concerned with. When the rupee reversed course and started depreciating again, the losses compounded owing to the asymmetric nature of Knock In Knock Out (KIKO) derivatives.

Some questions that jump out:

Conclusion
M R Venkatesh, a noted writer, commentator, auditor and TV personality, has filed a petition with the Special Investigation Team (SIT) on Black Money, constituted by the Supreme Court of India to immediately intervene and review this Forex Derivative Scam. The petition alleges that in several instances, the Regulator, notably the RBI either failed to or did not intervene.

The petition goes on to say matters were brought to the attention of the RBI as early as 2007-08 by individual exporters. Yet, RBI for reasons best known to it did not interfere and maintained a studied silence. Then as the disparate outcry of individuals turned into a desperate chorus of exporters across the country the media took notice. The crux of the contracts seems to be that the Banks were saying, “Heads we win, Tails you lose!”

The petition has been submitted to the SIT on April 7, 2016. Till date, no action has been taken by the SIT team. Will this be taken up in the upcoming Parliament session? Is this more important than say passing the GST Bill? Should SMEs continue to suffer with the double whammy of high interest rates and exposures to exotic derivatives? Only time will tell.

Below is a copy of the petition to the SIT team: 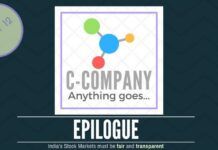 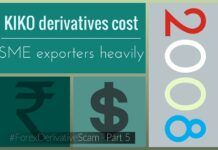 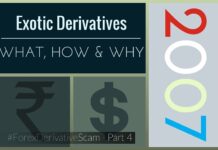 The wonderful world of Exotic Derivatives – Part 4 of #ForexDerivativeScam series