The Wisconsin results appear to have thrown a spanner in the White House run of Republican Donald Trump and Hillary Clinton from Democratic Party side.

[dropcap color=”#008040″ boxed=”yes” boxed_radius=”8px” class=”” id=””]A[/dropcap]ffecting the future count of votes required to win the party nomination, the Wisconsin results appear to have thrown a spanner in the White House run of Republican Donald Trump. The billionaire businessman lost to close rival Texas Senator Ted Cruz by a wider than expected margin.

On the Democratic Party side, former Secretary of State Hillary Clinton lost to her close rival, Vermont Senator Bernie Sanders. Clinton, who has surged ahead in delegate counts, however, does not appear unduly worried with the Wisconsin set-back.

Probably anticipating the defeat widely predicted by exit polls, both Trump and Clinton did not make an appearance in Wisconsin on Tuesday night. Both have already started focusing on the next big fight — the April 19 New York primary. Clinton spent Tuesday night at a fundraiser with top donors in New York City.

Cruz beat Trump by about 13 percentage points, 48 per cent to 35 per cent, giving a boost to the “Never Trump” movement. For the Republicans, 42 delegates were up for grabs in Wisconsin. With some results still coming in, Cruz looks set to win either 36 or 39, according to reports.

Democrat Sanders won by about 13 points, 56 per cent to 43 per cent, earning his sixth victory in the last seven contests. Of the 86 delegates at stake, Sanders has won 45 so far to 31 bagged by Clinton, according to reports.

Cruz’s double-digit win over Trump raises the prospect of a prolonged Republican nomination fight leading to the July convention in Cleveland, Ohio.

Sanders’ win in Wisconsin has given momentum to his fight against Clinton, trimming her commanding lead in delegates.

[dropcap color=”#008040″ boxed=”yes” boxed_radius=”8px” class=”” id=””]M[/dropcap]anhattan billionaire Trump, known for making controversial comments, did not face the television cameras after the results came in on Tuesday night, offering only a statement from his campaign — loaded with vitriol toward Cruz and the party establishment.

“Ted Cruz is worse than a puppet — he is a Trojan horse, being used by the party bosses attempting to steal the nomination from Mr. Trump,” his campaign said in the statement.

Cruz said the Wisconsin win showed the party was beginning to rally behind him.

Presidential hopefuls need to win just over 50 percent of their party’s available delegates to secure the nomination. For Democrats, the total delegates are 2,383, and for Republicans, 1,237. Pledged delegates are based on state primary results.

Speaking ahead of the Wisconsin primary, Sanders said he believed he had “an excellent chance” of winning the New York primary next Tuesday, and of picking up a lot more delegates. From then on, he added, he would have a great chance of winning in Oregon and California.

The high stakes contests will continue through June, leading to the party conventions in July – when the nominations are to be announced.

The number of delegates in each state — the US has 50 states — is based on the size of its population.

Most delegates are “pledged”, which means they are mandated to support a particular candidate at their party’s national convention in July. Each party also has a certain number of “super delegates” who can technically support whoever they please.

[dropcap color=”#008040″ boxed=”yes” boxed_radius=”8px” class=”” id=””]T[/dropcap]rump, 69, despite the numerous controversial statements he has made during his campaign — including for deportation of around 11 million illegal immigrants in the US, construction of a wall on the Mexico-US border, a temporary ban on Muslims coming to the US and proposing that women who have had abortions should be punished — has managed to attract the maximum votes, and attention, so far.

After the New York primary, Connecticut, Delaware, Maryland, Rhode Island, and Pennsylvania vote on April 26. Many of those states are expected to be favourable territory for Trump.

Trump’s fate will remain undecided until June 7, when California goes to the polls, and puts its 172 delegates up for grabs. Also at stake are Montana, New Mexico, New Jersey, and South Dakota.

In the Democrat camp, disputes between Clinton, 68, and Sanders, 74, have been markedly on the rise since the beginning of the campaigns on February 1.

Until now, the disputes were behind closed doors, especially on where and when to host a debate before the New York primary. However, on April 2, the fight went public.

In the past, the two opponents have sparred over other major issues, including an extended confrontation over immigration reform where Clinton rebuked Sanders for opposing a comprehensive immigration reform effort during former president George W. Bush’s administration.

The primaries and caucuses will continue until June 7 for Republicans, and for Democrats until June 14.

After that, the Republicans and Democrats will begin their conventions where a president and a vice-president candidate is chosen, on July 18 and July 25 respectively.

The presidential elections of the United States will take place on November 8, 2016. 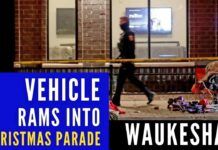 Vehicle rams into Christmas parade killing a few, injuring many in Waukesha, Wisconsin