The address to the nation by Ram Nath Kovind, immediately after he was sworn in as President of India was distinct and different in all respects.

While the President paid rich tributes to the 12 crore Indians by describing each and every citizen of the country as nation builders, what stood out in his speech was the reference he made to Pandit Deen Dayal Upadhyaya, the RSS ideologist who is famous for the Integral Humanism authored by him.

This is the India of our dreams, an India that will provide equality of opportunities.

“We need to sculpt a robust, high growth economy, an educated, ethical and shared community, and an egalitarian society, as envisioned by Mahatma Gandhi and Deen Dayal Upadhyayji. These are integral to our sense of humanism. This is the India of our dreams, an India that will provide equality of opportunities. This will be the India of the 21st century,” said the President in his 12-minute long speech.

But the President did not mention Jawahar Lal Nehru or Indira Gandhi even once during his speech. President Kovind paid rich tributes to Sardar Vallabhbhai Patel and Dr B R Ambedkar for the sterling services rendered by them to India. The Congress is certain to make this an issue in the coming days as for them Jawahar Lal Nehru and his family are the factors that sustain the organisation.

I am conscious I am following in the footsteps of stalwarts such as Dr Rajendra Prasad, Dr S. Radhakrishnan, Dr A. P. J. Abdul Kalam, and my immediate predecessor, Shri Pranab Mukherjee

“I bow to the 125 crore citizens of this great nation and promise to stay true to the trust they have bestowed on me. I am conscious I am following in the footsteps of stalwarts such as Dr Rajendra Prasad, Dr S. Radhakrishnan, Dr A. P. J. Abdul Kalam, and my immediate predecessor, Shri Pranab Mukherjee, whom we address out of affection as ‘Pranab Da’,” said the President at the beginning of his speech. Interestingly, though Pratibha Patil, the former president was present among the audience, President Kovind did not mention her by name.

“Our Independence was the result of efforts by thousands of patriotic freedom fighters led by Mahatma Gandhi. Later, Sardar Patel integrated our nation. The principal architect of our Constitution Babasaheb Bhim Rao Ambedkar instilled in us the value of human dignity and of the Republican ethic. These leaders did not believe that simply political freedom was enough. For them, it was crucial to also achieve economic and social freedom for millions of our people,” said Kovind in the speech.

The President stressed that India’s progress could be made possible only by combining the rich wisdom of age-old Bharat and the science of contemporary India.

In what could be seen as a marked difference from the policy pursued by most of the former Presidents who were elected at the instance of the Congress, Kovind preferred to remind the countrymen about the rich cultural and traditional heritage of the country and stressed that India’s progress could be made possible only by combining the rich wisdom of age-old Bharat and the science of contemporary India.

The India of the 21st century will be one that is in conformity with our ancient values as well as compliant with the Fourth Industrial Revolution. There is no dichotomy there, no question of choice. We must combine tradition and technology, the wisdom of an age-old Bharat and the science of a contemporary India,” said the President. He also mentioned that he would pursue the illustrious path set up by the likes of Dr Rajendra Prasad, Prof S Radhakrishnan, Dr Kalam and Pranab Mukherjee.

Kovind belongs to the Kol community found in Madhya Pradesh and Uttar Pradesh are the descendants of Guhan, the King of Sring-vera Puram referred in Ramayana.

Ram Nath Kovind, the second Dalit leader to occupy the Rashtrapati Bhavan after K R Narayanan, is more than a Dalit leader, pointed out genetic scientist Dr Gyaneshwar Chaube of Estonian Biocentre, Tartu. The scientific research carried out by Dr Chaube and his team of cellular and molecular biologists proved that Kovind belonging to the Kol community found in Madhya Pradesh and Uttar Pradesh are the descendants of Guhan, the King of Sring-vera Puram referred in Ramayana.

Genetic studies among the Kols, Bhils and Gonds proved that their genetic traits are pure and resembled closely with the tribe to which Guhan belonged. Kovind is the first Indian to occupy the Rashtrapati Bhavan who has this genetic resemblance with the characters mentioned in the great epic. Interestingly, Ram Nath Kovind and Lord Rama have a dark complexion, according to Dr Chaube.

The three year long genetic study carried out by Dr Chaube along with the scientists of IIT Kharagpur, Centre for Cellular and Molecular Biology, Hyderabad and anthropologists of Delhi University had succeeded in unravelling the close links these tribes had with that of Guhan, who helped Lord Rama, Seetha and Lakshmana to cross the Ganga River in their journey to the Dandakaranya Forests for the Vanavasa as per the diktats of Kaikeyi. The research paper was published in the venerated PLOS ONE as a peer reviewed scientific research findings in 2001. 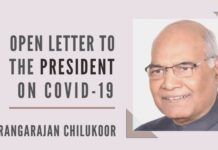 Goddess of Justice in blindfold and the scale in her hand...