After Indian Express, Times of India, and Hindustan Times, one of the major newspapers from the south, The Hindu also imposed salary cuts citing the COVID-19 pandemic-throwing-their-revenues-out-of-whack excuse. In an email attached with a handwritten note to all the employees, The Hindu Group CEO L V Navneeth said that the company’s Board has decided to implement a salary cut ranging from six percent to 25 percent.

In a two-page sugar-coated salary-cut-imposing letter, the CEO also says that the whole time Directors (N Ram, N Ravi, and Malini Parthasarathy) and Independent Directors have also “sacrificed” many substantial monetary benefits. It is a known secret in Tamil Nadu that Hindu’s owners always take consent of the powerful Trade Union controlled by the Dravida Munnetra Kazhagam (DMK). The current Trade Union leader is the former Chief Minister Muthuvel Karunanidhi’s daughter Kanimozhi and the earlier leader was T R Baalu.

One question that has been plaguing the minds of long-time readers of The Hindu Group is the rewording of their letterhead as ‘THG PUBLISHING PRIVATE LIMITED’.  Speculation is rife that this could be due to their pro-communist stand – the word “The Hindu Group” maybe not acceptable to the decision making whole time Directors like N Ram, who is a total Communist party supporter or believed to be a Card Holder party member of CPI(M).

The first to cut salaries was Indian Express blaming the Corona Crisis. One month ago Indian Express imposed a 10 to 35 percent salary cut[1]. Hindustan Times pre-emptively claimed that they were running up daily losses of up to Rs.3.5 crores. But staffers say that management is lying and hushing up huge annual profits. According to them the Management is only talking about the lack of advertisement revenue during the lockdown season and portraying a “fake loss” theory.

The Times of India Group controlled by Samir Jain and Vineet Jain has also imposed 10-20 percent salary cuts and are now planning a massive retrenchment. The staffers point out that Times of India Group which is running many newspapers and TV channels has more than Rs.1000 crores profit and this salary cut is just to protect its profits by the “unscrupulous and heartless” owners when it comes to money matters[2].

Now it is proven – Ideology such as Socialism, pro-Left, and pro-worker comes only after money. Calls by Prime Minister Narendra Modi and all Chief Ministers to employers not to retrench or cut the salaries of employees during the Corona Crisis are falling on deaf ears. Money, money, money – must be funny, in a rich man’s world, sang Abba. This move of a “left-friendly” newspaper shows that money is above all else – deny it to those who need it the most.

The letter of The Hindu Group CEO imposing salary cuts is published below:

The Hindu Group Salary Cuts… by PGurus on Scribd 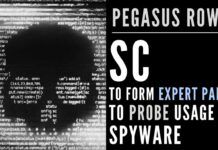 Baba Ramdev’s Patanjali : The Black Swan in the FMCG Sector