This post is reproduced from IndiaFacts and has been modified for formatting.
[dropcap color=”#008040″ boxed=”yes” boxed_radius=”8px” class=”” id=””]U[/dropcap]nfortunately, a dominant section of the political establishment in India, inclusive of its preferred set of “progressives” from the worlds of academia, media, culture et al have been engaged in inventing politically useful myths which are dangerous for any civilized society. Sandeep Balakrishna, a Bengaluru-based former IT professional, heading perhaps one of the most renowned digital media platforms in India has admirably sought to De-falsify our existing history through this painstaking work, and he promises more in future.
Since independence, while various aspects of the British colonial rule were rightly put under the scanner, the much-longer, and much more destructive era of Islamic imperialism was kept outside this historical lens for the very survival of the Nehruvian state, with its known Muslim communal bias and pronounced antipathy towards Hindus.The fact remains that the British colonial rule, with all its fault lines had provided some cultural-political space to many Indians to look at their past with objectivity and pride, but then the Nehruvian system took away from us that short-lived tryst with freedom of thought and expression. The Deobandi and Marxist-Pan Islamic influence in India’s cultural-historical establishment continued to grow so much that Ministers of Central government could go on glorifying the descendants of Babar the Invader, and “Great” historians could justify the sacking and sacrilege of the Holy Somnath temple and every barbarism against India and the Hindus.
[dropcap color=”#008040″ boxed=”yes” boxed_radius=”8px” class=”” id=””]A[/dropcap]ctually, falsification of Indian history, justification of Islamic terror while smothering its crucial theological basis had begun much before independence. Let’s look at what Nehru wrote in Discovery of India about Tipu Sultan:
“The real protagonists for power in India during the eighteenth century were four: two of them were Indians and two foreign. The Indians were the Marathas and Haider Ali and his son Tipu Sultan in the south; the foreigners were the British and the French.”
It is clear that Nehru overlooks the crucial difference between the Marathas, the indigenous people engaged in a fightback to reclaim their patrimony, and the Haider-Tipu duo, though born and brought up on the Indian soil, were engaged in furthering Pan Islamic empire in India. Thus Nehru smothers the all-important Islamic dimension for his flawed “secular” approach. Then again, Nehru credits, Haider Ali for being a “remarkable man and one of the notable figures in Indian history” who possessed “some kind of a national ideal”, and was a “leader with vision”. Though Nehru did not mention anything more about Tipu, except a mention about his efforts at strengthening the navy, he had laid some kind of a guideline for assessing such historical personages, without a word on his anti-Hindu actions as a fierce Jihadi.
[dropcap color=”#008040″ boxed=”yes” boxed_radius=”8px” class=”” id=””]O[/dropcap]ne of the post-independence text books on Indian history edited by R.C. Mazumdar, K.K. Dutta and H.C. Roychowdhury, “An Advanced History of India: Modern India”, Part. III, (1946, 1951), takes up Tipu Sultan(this section being written by K.K. D) in this fashion: “ ..he was not a fierce bigot—Though a pious Muslim, he did not attempt any wholesale conversion of his Hindu subjects—and he “forced it only on those recalcitrant Hindus on whose allegiance he could not rely”. Otherwise, he is described as a “remarkable personality-a man of sound moral character-with an intense faith in God” and endowed with a restless spirit of innovation” etc. At least, some basic facts were mentioned while withholding a lot more, and of course without explaining what “God” meant in Tipu’s tradition.

Nehru overlooks the crucial difference between the Marathas, the indigenous people engaged in a fightback to reclaim their patrimony, and the Haider-Tipu duo, though born and brought up on the Indian soil, were engaged in furthering Pan Islamic empire in India.

With rapid secularization or more precisely, Islamisation, a blatant falsification naturally found its way in our textbooks. One NCERT Social Science book for class VIII( Arjun Dev, 2005), glorifies Tipu Sultan as “an able ruler”, in religious matters “enlightened and broad-minded”, who thus won the loyalty and support of all . Another NCERT History text-book for Class xii by Bipan Chandra (2005, which was used in earlier textbooks) goes on to describe Tipu as one with a well-stocked library, having keen interest in the French Revolution ( to create the impression as if he believed in Equality, Liberty and Fraternity”), free from vices in personal life, conscious of the threat posed to India by the British (again slyly projecting him as another Tilak or Sri Aurobindo, and thus smothering the most obvious thing that he was actually working for an Islamic empire). Chandra further says that some British historians have described him as a religious fanatic, which was “not borne out by facts”, moreover, “he was tolerant and enlightened in his approach towards other religions”.
[dropcap color=”#008040″ boxed=”yes” boxed_radius=”8px” class=”” id=””]F[/dropcap]ollowing the then Karnataka education Minister, Shankaramurthy’s historically correct criticism of Tipu, in 2008, a Delhi University historian with Islamic- leftist leanings sought to present Tipu as an iconic figure in our anti-British struggle, while suppressing his Islamic bigotry in an English daily. (Incidentally, he also happens to be the first historian to be rewarded with an important appointment by the NDA government in 2014). As that daily would not publish my article countering this, only an abridged version of my Letter to Editor was carried (11 Oct 2006), wherein I had pointed out as to how Tipu needs to be studied not because of his “iconic stature in the anti-colonial struggle” as he was suggesting, but because of our need to “understand the history of aggression on our society and culture, so that we are intellectually and logistically better prepared to counter Islamic terrorism’. 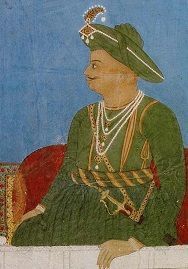 I had further pointed out how Tipu was committed to helping “my brethren Musselman in the general cause of religion”, who looked at Hindustan being “over-run with Infidels(Christians) and polytheists(Hindus)”. I also rubbished this attempt to project Tipu as a “modernizer” since he had forcibly converted Hindus to Islam. As for the Marathas, I had pointed out that Tipu felt that “Haider Ali had an understanding with the Poona infidels”, while hoping that the “religion of Islam will obtain exclusive prevalence over the whole country”. (All these citations are from Tipu’s papers).
Hence the UPA Minister Rahman Khan’s announcement to set up an university in Tipu’s name was no sudden decision but part of a long process in the rehabilitation of Tipu’s reputation. This is how Tipu Sultan came to be presented as a “freedom fighter” and bracketed along with Basavanna, Chennamma, Gandhi in the hoardings put out by the Karnataka government.
[dropcap color=”#008040″ boxed=”yes” boxed_radius=”8px” class=”” id=””]S[/dropcap]andeep Balakrishna shows with meticulous research that Tipu was neither a secularist, nor a scholar as propagated by the jihad-friendly secular–liberal establishment in India. True, Tipu was very well known in England/ France, and when Rammohan Roy was moving about in London in his Bengali costume (1830), the small boys shouted “Tipu ! Tipu!” (Forrest, 1970). His understanding with the French and the sobriquet “Citizen Tipoo”/ Jacobin club etc just can’t hide the hideous dimensions of his persona/rule.
Sandeep Balakrishna shows how people like Girish Karnad and Bhagwan Gidwani have mischievously tried to paint Tipu as a national hero by smothering his Islamic fanaticism. He also writes on the role of Hyder, who usurped the throne from his employer, the Hindu king , and goes on to provide various details of Tipu’s early life, including how he was once publicly flogged by his father. In the chapter, The Durbar of an Islamic Fanatic, he shows in great detail, how Tipu gave Islamic names to the existing cities/towns, and many other places , how chiefs of every district were Muslims, how converts to Islam were exempted from taxes, how Muslims were exempted from paying house tax, how lands seized from non-Muslims were given to Qazis and other Muslim officers etc.
Sandeep explains how Tipu’s “morbid obsession with Islamizing his entire kingdom wrecked the economy”. He imposed Farsi language on the Kannada speaking people, and formed one Ahmadi contingent consisting of converted Hindu youth, mainly from Mangalore, the Malabar and Coorg, much like the Janissaries of the Ottomans. The calendar and currency he introduced were Islamic in content and complexion.
[dropcap color=”#008040″ boxed=”yes” boxed_radius=”8px” class=”” id=””]S[/dropcap]andeep Balakrishna further shows how Tipu lacked even the “most basic and common attributes of a king”, and his failure was primarily because of his “obsession with Islam and his penchant for grandiose daydreaming”.

The author provides details of Tipu’s inhuman conduct, and the savagery he wreaked on the hapless people of Coorg (Kodagu), Malabar and the desecration and destruction of Hindu temples. His “illustrious” career in spreading Islamic imperialism was matched by his invitation to Islamic rulers beyond India to carry on Jihad on its soil.

Such a figure no wonder evokes such a tremendous admiration from India’s only “progressives”—the public sector historians and theatre personalities. It is distortion of this sort which has been at the root of India’s collective failure to grasp the nature of Islamic terrorism, define its content and scope and devise ways and means to counter it effectively. Its time some objective history was written in India. Naturally, Pakistan has one of its naval frigates named after him, so has the Shipping Corporation of India, and our own Amar Chitra Katha publication has a book on him as a role model. Tipu’s use of rocket technology, a gift from the French as Sandeep shows, does not mitigate his crime against humanity. He was an Islamic bigot, a true soldier in the service of a theologically sanctioned war of elimination of both the Hindus and Christians. Fortunately for India, he was defeated and killed by the English East India Company in 1799.
The author provides details of Tipu’s inhuman conduct, and the savagery he wreaked on the hapless people of Coorg (Kodagu), Malabar and the desecration and destruction of Hindu temples. His “illustrious” career in spreading Islamic imperialism was matched by his invitation to Islamic rulers beyond India to carry on Jihad on its soil.
[dropcap color=”#008040″ boxed=”yes” boxed_radius=”8px” class=”” id=””]L[/dropcap]et’s think of it now. Without his elimination, and the restoration of the Hindu royal dynasty to power in 1799 (its rendition in 1881), contemporary Karnataka and Bengaluru, currently the hub of IT industry in India would have been turned into another Pakistan/ Afghanistan/ Bangladesh. Despite this, Bengaluru has experienced sporadic incidents of Islamic terror is a different story.
Much has been written on Tipu Sultan before and Sandeep Balakrishna’s book is a welcome addition to that list. This needs to widely read and appreciated. He has set the record straight and has provided an excellent historical account and exposed the dangers inherent in what the contemporary historians and fellow-travellers are doing as part of their pro-Islamic propaganda exercises.
Disclaimer: The author of the book is also the Chief Editor of IndiaFacts. Views expressed in this article are the reviewer’s.