The vote by Britain has also impacted the unity of United Kingdom since Scotland and Northern Ireland wanted to continue in Europe while England and Wales wanted out. Younger age groups wanted to remain compared to older cohorts and poor wanted out compared to rich.

Throughout the seventies and eighties it was globalization [The G word] of manufacturing facilities that is for Product Markets.

[dropcap color=”#008040″ boxed=”yes” boxed_radius=”8px” class=”” id=””]T[/dropcap]he anecdotal evidence often told in many a business school classroom used to be something along these lines: The doors of the Ford car are made in Barcelona and the seat cushions near Budapest and Gearbox in the suburbs of Paris and Music System in Osaka and the assembly is done at Shanghai and the car is sold in Thailand. So, what is American about it? It is transnational and the geographical boundaries are crumbling and think global and act local we were told, and the term “glocal” came into existence. This was the ultimate in the process of global integration of economic activities through integration of manufacturing facilities to reduce cost, take advantage of pool of skilled resources (aka low cost) available in the emerging markets. It also argued about “standardization” of lifestyles – mostly conforming with the American standards — in terms of Jeans, Processed Food and Colored Water (Cola) drinks.

To be continued…
Note:
1. Text in Blue points to additional data on the topic. 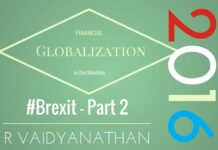 The law is the same for all – Did Ramesh Abhishek...