Sindh’s tallest leader Altaf Hussain endured all kinds of atrocities at the hands of the Pakistan Army and ISI, yet he continues to fight for the rights of Mohajirs (migrants) and Sindhis. In this interview with Vivek Sinha, Editor-in-Chief News Intervention the founder of Muttahida Qaumi Movement (MQM), Altaf Hussain, says, “Sindh doesn’t want to stay with Panjabi Pakistan anymore. Altaf Hussain wants a separate Sindhudesh.”

Vivek Sinha: Taliban has captured Afghanistan with active help from Pakistan Army and ISI. How do you see the Taliban’s takeover of Afghanistan and how will it affect the MQM’s movement in Sindh?

Altaf Hussain: There is no doubt that without logistic, financial, military, and intelligence sharing, the Taliban could never ever have captured Kabul and other parts of Afghanistan. Certainly, with regard to taking over Afghanistan, the Taliban has strong connections with Pakistan Army and ISI and they would capture the financial hub of Pakistan i.e. Karachi too, where the original MQM founded by me has more than 95% of the people not only in Karachi but also in other urban areas of Sindh. We are also getting support from the indigenous population that is the people from rural Sindh.

MQM is struggling harder to liberate Sindh from the occupation of the Punjabi Army, their henchmen, and their proxies. MQM wants to make Sindh an independent and sovereign Sindhudesh. We don’t want to stay with present Pakistan anymore. Even earlier, we fought with the Taliban for several years and stopped the Taliban from taking over Karachi. That was MQM. Nonetheless, we urgently need the support of all democratic nations of the world and the international community, particularly from neighboring India. We are fully prepared and we will face them (Pakistanis) with full force to liberate Sindh and keep Karachi protected. We will save Karachi and would never become part of Punjab or Pakistan or their federal territory.

Vivek Sinha: Will there be a rise in Islamic extremism across Sindh and other occupied territories of Pakistan in the near future?

Altaf Hussain: MQM is the only party that wiped out Jamaat-e Islami (JI), Jamiat Ulema-e Pakistan (JUP), Muslim League (ML), and other right-winged parties. Sindh is a land of secular people and MQM is the top secular political party and henceforth, MQM is fully determined not to let this secular landslip into the fangs of religious fanatics.

Vivek Sinha: Almost every month there are instances of Hindu and Christian girls being abducted and raped by radical Islamists in the Sindh province. Why do think the world remains silent on these Pak Army-sponsored atrocities in Sindh?

Altaf Hussain: As far as the abduction of Hindu girls and women is concerned, MQM has always been very vocal, and is the only party that has always condemned these furious anti-human acts and deeds by religious fanatics. It is our commitment to the international community that after getting independence, Sindhudesh would be a secular country. There would be complete religious freedom and the non-Muslim communities would enjoy full freedom to celebrate and observe their rituals and festivals. MQM would guarantee it at all costs. Unfortunately, it is very sad on the part of the international community to remain silent over this tyranny.

Vivek Sinha: MQM has had a long journey and the movement is built upon the sacrifices of countless Mohajirs. Despite this glorious past, MQM is still a struggling movement till today. What do you think is the reason?

Altaf Hussain: Because the military establishment of Pakistan persistently intervened in the political system and affairs of political parties through blackmailing tactics and by offering lucrative positions and power-sharing… so they also made efforts to make me tilt on their side but to no avail. (Pakistan’s) the military establishment tried several times to take me on their side, but I have a different DNA that is not saleable. That’s why, in sheer frustration, they unleashed their wrath and played havoc on MQM through frequent deadliest military crackdowns. They failed to buy me and then they switched to their Plan B and created factions within MQM.

Pakistan Army and ISI had created terrorists’ gangs and named them MQM HAQIQI, MQM-P, and PSP, whereas the original MQM led by me has been banned and its offices bulldozed. Even my house has been sealed. Thousands of MQM office bearers and activists were murdered in captivity and in fake encounters and many have been thrown in the river (waters) without any lawful charge. They tried everything, every trick in their book but they can’t force the Mohajirs to move away from me. We have lost 25,000 Mohajir youth and MQM workers at the hands of the demonic Pak Army.

Vivek Sinha: During the glorious days of MQM there were people who could lay down (or take) lives for Altaf Hussain. Yet today’s scenario is slightly different. What is the reason for this political downfall?

Altaf Hussain: I don’t agree that MQM has fallen down politically, but the actual scenario is totally different because every street, town and district is held hostage under the guns of the Pakistan Army and their law enforcement agencies (LEAs) like the Paramilitary Rangers and others. After persistent assassinations, abductions, and enforced disappearances of MQM office-bearers and workers, I asked my followers to observe unity under silence till our next strategic move. The military has an unlimited variety of weaponry and we are totally unarmed. You may guess how the unarmed may engage in a fight with the heavily armed.

Altaf Hussain: I have already given the answer that covers all aspects of your question, the excesses and the genocide of Mohajirs by the Pak Army. We knocked at all the forums in the past and we are still approaching the international community for help. No way, we are not engaged in any sort of backdoor negotiations with the military establishment, and reports in that context are sheer rumors.

Vivek Sinha: Do you think that Mohajirs should also pick up guns and fight for their independence, like the Baloch brethren in Balochistan? Is there any organizational strategy towards this goal?

Altaf Hussain: I have already given the answer.

Vivek Sinha: What is your political resistance strategy to counter the international terrorist state Pakistan?

Altaf Hussain: We are doing what we can. We are sending human intelligence-based true and factual reports to all the corners of the world. We play a big part in the war against terror. We are shoulder to shoulder with the international democratic world.

Vivek Sinha: How would you motivate the oppressed Urdu-speaking population against atrocities of the Pakistan Army and the ISI?

Altaf Hussain: Each and every Mohajir is aware of the atrocities and barbarism of the Pak army. They suffered from an irreparable loss in the form of murder of either one, two, or three members of their family. Even from my own family my elder brother Nasir Hussain and nephew Arif Hussain were arrested, tortured for three days, and later on they were taken to one of the suburban areas of Karachi and were shot dead in cold blood. And after murdering them, my nephew’s head was axed into two pieces. Almost all Mohajirs are already motivated because of such brutal killings and waiting for the support of the international, democratic world.

This interview gives us a very detailed insight into the atrocities conducted by Pakistan.
Pakistan has always been into forceful retention of provinces be it Sindh or Baloch.
Pakistan is a living hell for minorities and Sindh and Baloch’s freedom movement should not teach any other country Democracy and freedom of speech. 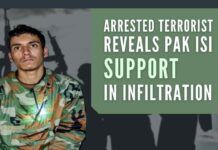