Latha Iyer sits down with Anuraag Saxena on the India Pride Project (IPP) and what it means to every citizen of India.

Q: When and how did you get the idea of starting this project?

A: When we moved to the USA in 1998 we saw how proud they were of their heritage. Even 100-year-old buildings were carefully protected and displayed for people to visit; on the other hand, our heritage (forts, temples, museums, etc) lay in ruins. Besides this, there was rampant looting of India’s art and heritage. First, it was the plunderers, then the colonials… and now it is just an “industry”. The common thread is that we as a people have LET this happen for centuries. Shameful for us to sit back… as a nation, and watch this happen.

Q: How are the recent thefts/looting different from historical plunder?

A: Yes the recent looting is VERY different from the historical nature of the plunder:

Q: Can you give us a sense of this theft? How large is it? What is being done to recover the antiques etc?

A: You should find most responses in the info-graphic below. Q: What is the modus operandi of these people?

A: Most of the high-value cases follow a fairly standard operation procedure. It is an international criminal-network involving dacoits, smugglers, art-dealers, hackers and lawyers.

Will they win, or will the gods?

A complex web of international criminals is involved in the loot. Sophisticated technologies and crude, brute force work together to create a seamless supply-chain of looted goods.

Auction-houses and art-dealers in America, Australia, Switzerland, Singapore, UK, Germany, in fact, most of the Europe, act as “credible fronts” for selling these off to museums and private-collectors.

Here is a simplistic look at how it works. Q: What is your take on artifacts, particularly idols, being a symbol of cultural pride?

A: Idols are sacred not just for the religious symbolism but also for creating a sense of identity in its people. If you were to look at it from a cultural and faith perspective, idols (especially from religious sites) have tremendous emotional value. This is across various religions.

If you look at Indian villages; life revolves around a couple of spaces – there is a village-well, a village-temple (or other place of worship), and probably a banyan tree. That’s pretty much it. That’s where people congregate, celebrate their festivals and create their memories.

When such places of worship and social importance get looted, it rips apart the social-fabric of that village. Looting away a statue from a temple is no different from cutting that banyan tree. That “space” loses its significance. Q: Is there a distinction between illicit and illegally looted antiquities?

A: Legal definitions came in much after these cultural norms were set. I won’t get into technical distinctions. It is a bigger MORAL issue… of cultural-heritage staying with the communities they belong in.

Q: What is the current international protocol for bringing back heritage artifacts?

A: The largest, most globally accepted protocol in the UNESCO convention of 1970, to which India is a signatory as well. Available here: http://www.unesco.org/new/en/culture/themes/illicit-trafficking-of-cultural-property/1970-convention/

While the convention is large and verbose, it essentially says that all countries that sign have an obligation to:

A: Well, most countries with a rich past are victims of the art-mafia. Our hearts are with any countries that lose their heritage.

The difference in India though is:

See this table for details on estimated effort by various countries:

Q: Do you see India as an easy target for such thefts? What is it that we are lacking in which makes stealing antiquities easier?

A: India is an easy target for many reasons.

As a result, India has emerged as a no-consequence zone within the art world. Unscrupulous dealers and unethical buyers realize that they are relatively safer dealing in Indian antiquities

Q: What do you aim to achieve through your three-city lecture series this April? In what way can the citizenry pitch in?

A: There is one key difference today, from the India that I left behind. There is a significantly higher amount of rhetoric and lip-service among political-leaders.

Political leaders seem to act ONLY when there is huge public outcry… and when we as a nation let them know that we really do care about something. 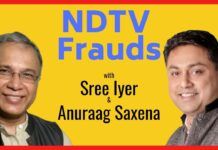