All the cobwebs of confusion stand cleared. The Narendra Modi Government has finally invited 14 J&K politicians to New Delhi for talks on the J&K’s political future on June 24. Nine are from Kashmir and five from Jammu. Two of the five politicians from Jammu are ardent supporters of Kashmiri politicians. Three are from J&K BJP, who had supported the Mehbooba Mufti-led coalition government to the hilt.

It’s not a secret that all these Kashmiri politicians have umpteen times stated that “J&K needed a political package, and not financial and employment packages”.

This will be the composition of the June 24 meeting. Paradoxically, the policy-makers in New Delhi didn’t think it politically prudent to invite even one leader of the Hindu-Sikh refugees from Pakistan, Pakistan-occupied-Jammu & Kashmir (PoJK) and Kashmir, all victims of fanaticism and terrorism. The Ikkjutt Jammu, the sole voice of the nation in J&K, was also not invited. It means the votaries of a “meaningful dialogue with Pakistan” and J&K’s separate status would strengthen the meet. Their number would be eleven out of fourteen invited. As for the remaining three would be there in the meeting only in name since their supreme leaders — the PM and the HM — will be in the driver’s seat.

In the meantime, Mehbooba Mufti has reportedly decided to boycott the meet and the JKNPP activists have held a demonstration in Jammu against the idea of a meet on J&K in New Delhi.

At the same time, a report in a leading English language national daily on June 20 gave the nation to understand that the Union Government convened the meet on J&K under US pressure. The report read like this: “The sudden move by the Centre also comes in the wake of pressure from the international community, especially the United States, to restore democratic and electoral process in J&K, which remains under the Centre’s rule since 2018”[1]. Another report in a leading Hindi language national daily reported the reaction of the Pakistani Foreign Minister Shah Mahmood Qureshi to the scheduled meet. The report read: “Pakistan Foreign Minister Shah Mahmood Qureshi said that Pakistan will oppose any move on the part of New Delhi to further divide J&K and change its demography”.[2]

What could be discussed during the June 24 meeting? Obviously, the discussions would be on restoration of statehood status, restoration of Article 35A, Article 370 and J&K’s separate status, delimitation of assembly constituencies and assembly elections in J&K. PM Narendra Modi and HM Amit Shah might focus on the developmental issues. But the Kashmiri politicians and their two touts from Jammu would only insist on the restoration of a position as it existed in J&K before August 5, 2019, when the Modi Government scrapped Articles 35A, Article 370 and J&K’s separate status and divided J&K into the Union Territories of J&K and Ladakh.

It’s not a secret that all these Kashmiri politicians have umpteen times stated that “J&K needed a political package, and not financial and employment packages”. The truth is that the Kashmiri politicians are clear as far as their agenda is concerned. Their slogans range from limited accession with India or greater autonomy/ self-rule, bordering on sovereignty to Indo-Pakistan joint control over J&K to separate nationhood status.

What could happen during the June 24 meeting? Will the Modi government concede the demand of the Kashmiri politician seeking restoration of the pre-August 2019 status for J&K? The Modi Government cannot and will not do it because it knows full well that it would lose its face across the nation and suffer political reverses not only in 2022 Assembly elections in the very crucial UP, Uttrakhand, Goa and HP but also in the 2024 general elections. The Modi Government just can’t commit political suicide by walking into the trap of the out-on-the-limb and desperate Kashmiri politicians.

What will happen if the Modi Government granted statehood status to the UT of J&K? Such a step will in no time undo what the Modi Government did on August 5, 2019. In other words, the grant of statehood status to the UT of J&K will mean the retransfer of Home, Finance, Revenue, Law and Parliamentary Affairs, Forest and similar other vital Departments and the coveted office of the Advocate General to Kashmir and Kashmiri politicians. Kashmiri politicians, without any exception, had misused and exploited these Departments to the extent possible to cause irreparable damage to the national interest in the highly strategic J&K, promote and shield separatists and terrorists, jeopardize even the general civil, political and economic rights of the people of Jammu and Ladakh and further the Pakistani cause in J&K. It’s extremely unlikely that the Modi Government will take such a risk at a time when the aggressors’ China and Pakistan have already joined hands against India and when the US is all set to withdraw its forces from Afghanistan.

What will happen to Jammu if the Modi Government agreed to hold elections in J&K based on the fudged 2011 census figures’ delimitation or even based on the latest population figures? The people of Jammu province, the nation’s backbone, will be out of the 9-member Council of Ministers. The point is that Kashmiri politicians belonging to one particular religious denomination would capture all the nine berths in the Council of Ministers, including the office of the Chief Minister. We don’t need rocket science to draw such a conclusion.

What, then, is the solution? The only solution is the further division of J&K and the creation of a separate Jammu state. Kashmir has to be maintained as a UT for all the times to come. Such an approach will help PM Modi and HM Shah to break the backbone of Kashmir jihad and Pakistan, empower Jammu province and win over the nation. Any other move on their part will be fraught with dangerous ramifications. The ball is in the court of the PM and the HM. 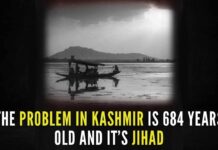