When I wrote about the conference on “Dismantling Global Hindutva by the global network of anti-Hindu activists and so-called intellectuals, little did I know that controversy was brewing in India by a Bollywood-based Javed Akhtar, a lyricist. Akhtar raised an unprecedented controversy which is nothing but a sadistic Hinduphobic sentiment with an uncanny attitude against Hindutva. How could he dare to make the statement, “What the Taliban is doing is barbaric, of course, but those supporting the RSS, VHP, and Bajrang Dal are the same.” What is it if not a blatantly ridiculous and highly insulting comparison between Taliban and RSS and Hindutva believing organizations and calling them barbaric? It is time that Akhtar decides to move to a “tolerant Taliban” (an oxymoron) nation such as Pakistan, Afghanistan, or any other country of his choice.

Growing up I did not know much about Akhtar except his wife, Shabana Azmi, acting in Bollywood movies. Like many common Indians, Bollywood was a source of entertainment for me too. However, lately, I began to observe and analyze and became sensitized with increasing Bollywood attacks and demonization of Hindutva, Hinduism, and Hindus (HHH). Sadly, too many Bollywood creations have continuously shed a negative light on HHH. The most disgusting and worrisome is the fact that too many so-called Bollywood stars, born in a Hindu family but not practicing Hindu ethos, have joined ranks with people like Akhtar and Bollywood Khans in demonizing, disrespecting, and degrading HHH.

Can Javed Akhtar cite any major instance that points to Taliban-like activities in India, a historically Hindu majority, peace-loving, and God-fearing nation allowing a multiplicity of religious practices?

I wholeheartedly welcome and commend various news outlets in India expressing outrage and questioning Akhtar’s statement. An outspoken Akhtar has every right to be critical as provided under India’s constitutional right to free speech and secular policies. But his characterization of anything “Taliban” and calling several organizations “barbaric” is character assassination. I wonder if he is craving for a legal challenge and I hope the RSS, VHP, Bajrang Dal, and the likes take him head-on. I refute and strongly condemn such accusation and at the least, I call for the strongest condemnation by every Indian globally. Can Akhtar cite any major instance that points to Taliban-like activities in India, a historically Hindu majority, peace-loving, and God-fearing nation allowing a multiplicity of religious practices?

The best advice for Akhtar is to make himself familiar with the pre-and post-independence nation-building and humanitarian efforts by RSS and other named organizations including the recent pandemic. Yes, RSS opposed the division based on religion but when the partition became inevitable or imposed then why not a clear-cut separation of a Hindu nation, India, and Islamic Republic, Pakistan. The next best option is that we all let the bygones be bygones and live in peace and harmony in Hindu majority and tolerant India with rights and privileges for everyone to practice and follow their religious beliefs. However, people like Akhtar appear adamant to incite religious controversies.

If all else fails, let Akhtar spend a few weeks. or perhaps move permanently, to Taliban’s Afghanistan. It will be worthwhile for him to experience the sad realities of how the women, children, and any non-believer of Taliban ideology are being treated and tortured in their own homeland. There is no doubt that a person of significant influence and financial means, Akhtar can arrange his passage to Afghanistan through Pakistan. It is too bad that he missed the opportunity for a one-way ride, even complimentary when India was sending empty flights to bring back Indians and Afghanis back to India immediately after the Taliban took control of Afghanistan.

In fact, it is never too late for him and other Bollywood celebrities with wealth, influence, and friends in Pakistan to charter a flight destined to what they believe to be “tolerant Taliban’s” Pakistan and/ or Afghanistan. In case, the readers don’t remember, it was not too long ago when the Bollywood celebrity Naseeruddin Shah feared for the safety of his children[1], and Aamir Khan described a rising tide of religious intolerance in India, and his wife wanting to leave[2]. There are others in Bollywood and people like former Governor Aziz Qureshi and former Samajwadi Party Minister Azam Khan in U.P. who could accompany them. Important to note that Qureshi has been just charged for sedition for derogatory remarks against the Yogi government for comparing it with Satan and blood-sucking monsters[3]. Azam Khan is already serving a jail term for many unlawful activities during his tenure as a Minister. I surmise that the list of Hindu phobic individuals, political activists, news media personalities, and the politicians who oppose the current Modi government is long who should accept the once-in-a-lifetime opportunity to taste the barbaric and heinous culture of the ‘tolerant Taliban’ regime.

It appears that Hindu-bashing activism by Hindu-phobic people and organizations in Hindu majority India is on the rise. Such activities become even more frequent and dominant when the elections are nearing such as the assembly elections in the BJP led Uttar Pradesh and a few other States. Whatever the motives, Hindu bashing must cease and be contained not to let the communal tensions ferment. It is also time for the global unity of Hindus and Hindu-minded individuals of all faiths to raise their collective voice to root out the hatred against HHH.

It is the sad truth that people like Akhtar and many Bollywood-based actors/ actresses are abusing their freedom of expression to associating Hindu majority India, with the Talibanic philosophy. They are welcome to join the tolerant Taliban army in any country of their choosing but a tolerant new India should not have a place for intolerant and thankless characters like them. 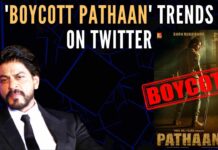 Shahrukh and Deepika starrer Pathaan trends with #BoycottPathaan: Here’s why

Sri Lankan crisis is its best opportunity ever