[dropcap color=”#008040″ boxed=”yes” boxed_radius=”8px” class=”” id=””]W[/dropcap]hen 49-year-old Veena Gandhi came to Dr Tarun Mittal, a laparoscopic and obesity surgeon at Sir Gangaram Hospital in the capital, she had difficulty walking with shortness of breath and acute pain in her joints. The culprit: obesity.
Suffering from an array of health issues like hypothyroidism, hypertension and an uncontrolled Type-II diabetes that put her on insulin therapy, she also had difficulties sleeping at night.
“We performed laparoscopic gastric bypass on her in which we created a food channel from stomach to small intestine by-passing around 200 cm of small intestine,” Dr Mittal told IANS.
[dropcap color=”#008040″ boxed=”yes” boxed_radius=”8px” class=”” id=””]P[/dropcap]ost-surgery, she lost 25 kg systematically in a span of 10 months and is set to lose extra 10-15 kgs in the near future. Today, Gandhi is off insulin with good glycaemic control. “Without the operation, she would have been a high-risk candidate for ischemic heart disease, obstructive sleep apnea with subsequent respiratory failure, uncontrolled diabetes and associated complications”, Dr Mittal said.
The bare fact is that there are millions of obese Indian in all age groups who just cannot shed the fat despite trying a range of options – from diet control to running or gym and even yoga.
“Simple obesity (body mass index of over 30) can be controlled by diet and exercise but it requires 7,500 calories to burn a kg of body fat. It means brisk walking on a treadmill at nine km per hour for 20 straight hours!,” quips Dr Atul Peters, director and head, Institute of Bariatric and Metabolic Surgery, at Fortis Hospital.
[dropcap color=”#008040″ boxed=”yes” boxed_radius=”8px” class=”” id=””]F[/dropcap]or those who prefer the weight-loss pill route, “there are over-the-counter drugs for weight loss which can result in a temporary weight loss of four-five kgs but the same will come back in no time once those pills are stopped,” he said.
Research has shown that in many cases, a significant underlying cause of morbid obesity is genetic.
Studies have demonstrated that once the obesity is established, efforts such as dieting and exercise programmes have a limited ability to provide effective long-term relief.
“More than 90 percent of participants in weight-loss programme regain fat within a year and it is even more difficult for morbidly-obese patients,” explains Dr Naresh Singhi, consultant, laparoscopic bariatric surgeon at Nanavati Super Specialty Hospital in Mumbai.
[dropcap color=”#008040″ boxed=”yes” boxed_radius=”8px” class=”” id=””]A[/dropcap]ccording to a study published in the prestigious journal Lancet, at over 30 million obese people, India is just behind the US and China in the “Global Hazard List” of top 10 countries with highest number of obese people.
According to the 2015 World Health Organisation data, prevalence of ‘overweight in adults’ increased to 22 percent (2014) from 19.7 percent (2010) and obesity increased to 4.9 percent (2014) from four percent in last four years. A body mass index between 25 and 30 is deemed to be overweight.
Nearly 14 percent of women (age group 18 to 49) in India were overweight or obese in 2008 (compared to 10.5 percent in 1998)
Experts say that the obesity epidemic is attributable to dietary and behavioural trends. Added to that is a person’s genetic makeup and susceptibility to obesity-related disease.
[dropcap color=”#008040″ boxed=”yes” boxed_radius=”8px” class=”” id=””]E[/dropcap]ach individual’s genetic background remains an important determinant of susceptibility to obesity.
“It is clear that obesity often runs in families. Having obese relatives increases one’s risk for obesity even if the members of the family do not live together or share the same patterns of exercise and food intake,” Dr Mittal notes.
But in some cases, especially young, simple weight-loss programmes can work wonders.
[dropcap color=”#008040″ boxed=”yes” boxed_radius=”8px” class=”” id=””]T[/dropcap]ake 28-year-old Kiran with a BMI of 28 who recently visited Dr Peters. She was looking for a quick-fix solution before her wedding to control weight. “Upon investigations, we found that she was also suffering from Poly Cystic Ovarian Disease (PCOD) and undiagnosed severe hypothyroidism. I dissuaded her against surgery and she was put on a medical weight-loss programme,” Dr Peters adds.
Kiran lost desired weight happily. Her PCOD and thyroid problem came to normal. “Cases like Kiran’s are very common. Therefore, when you go for a serious diet and exercise programme, get a thorough medical checkup done,” he advises.
However, for obese and morbid-obese, bariatric surgery remains a good option for sustained weight loss. “It also cures Type-II diabetes, hypertension and other metabolic diseases,” says Dr Singhi.
So if you are obese or overweight, do not lose hope. Get your body composition analysis done which calculates the BMI.
[dropcap color=”#008040″ boxed=”yes” boxed_radius=”8px” class=”” id=””]T[/dropcap]he simple formula is: If your BMI is between 25 to 32.5 then lifestyle changes like diet and exercise can work and help you lose weight. “However, if your BMI comes above 37.5 with obesity-related illnesses, endoscopic surgery or bariatric surgery should be considered as a treatment option for long term and sustainable weight loss,” Dr Chowbey advises.
It was almost 15 years back when the famous Indian wellness brand VLCC, founded by Vandana Luthra, started observing November 26 as an anti-Obesity Day as part of an annual campaign to promote good lifestyle habits to stay healthy and fit.
Today, it is observed in various parts of the world on November 26 every year 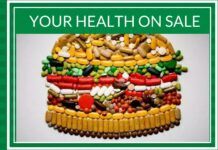 Your Health On Sale