With hide and seek game between former controversial Mumbai Police Commissioner Param Bir Singh and Maharashtra Government going on for the past six months, the State Government on Wednesday told Bombay High Court that they are not aware of his whereabout and is non-traceable. The serving IPS officer Param Bir Singh’s counsel Mahesh Jethmalani said that he is not yet declared as an absconder and responding to all notices. Meanwhile, IPS officers controlling authority Union Home Ministry headed by Amit Shah is a mute spectator on this Tom & Jerry game.

There were rumours floating that Param Bir who fell out with Maharashtra Government has escaped from India to some European county. But this is not possible for a serving officer if he has used his own passport. There were also rumours floated that the controversial top cop has used a fake passport. But many friends of Param Bir Singh said he is now at his home State Haryana and often seen at Chandigarh-based friend circuits.

On Wednesday, Maharashtra Government told the High Court that as the IPS officer was not traceable, it did not wish to continue its assurance that no coercive action (such as arrest) would be taken against him in an Atrocities Act case. Senior counsel Darius Khambata, appearing for the State Government, told a division bench of Justices Nitin Jamdar and Sarang Kotwal that the circumstances had changed. “He isn’t traceable. In these circumstances, we do not want to continue our earlier statement where the government said it would not take any coercive action against him,” Khambata said.

Param Bir Singh’s counsel Mahesh Jethmalani said he had not been declared as an absconder yet. “In this case, he was summoned twice, and both the times he responded,” Jethmalani said. The High Court was hearing a petition filed by the senior IPS officer seeking to quash the FIR lodged against him under the Scheduled Castes and Scheduled Tribes (Prevention of Atrocities) Act and relevant IPC sections on a complaint filed by police inspector Bhimrao Ghadge. The Judges adjourned the hearing to the next week. This case was registered against Param Bir Singh after he went against the State Govt, ruled by Shiv Sena, NCP, and Congress.

Param Bir Singh’s lawyer Mahesh Jethmalani said that the FIR was a backlash over Singh’s allegations of corruption against former Maharashtra Home Minister Anil Deshmukh. The IPS officer is also facing at least four extortion cases in Thane and Mumbai. He was transferred from the post of Mumbai Police Commissioner in March after the arrest of the police officer (now dismissed) Sachin Waze in the case of a vehicle with explosives found near industrialist Mukesh Ambani’s residence and the murder of businessman Mansukh Hiran.

Param Bir Singh then accused Deshmukh of asking Waze to collect Rs.100 crore every month from bars and restaurants in Mumbai. The NCP leader, who denied the allegation, soon stepped down as Minister and is facing a CBI probe.

The controversial Indian Police Service (IPS) officer Param Bir Singh is known for his trapezium playing by shifting loyalties between political parties ranging from Congress to BJP to NCP to Shiv Sena. He was a blue-eyed boy of all those who came to power in Maharashtra and got embroiled in many controversies. Param Bir Singh was the key police officers who floated “Hindu Terror” during the Congress regime and became a friend of the BJP regime from 2014 and later became friends of Maha Vikas Aghadi regime and now gone out of their favour. 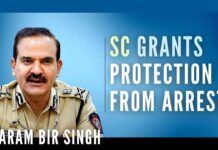 Lawyer tells SC that Param Bir Singh is very much in India. SC grants protection from arrest and orders to join the investigation