Part 1 of this series is titled Role of Church in Indian Politics. Part 2 wonders if the Anti-Conversion bill brought by the Morarji Desai government was the cause of its fall. This is Part 3.

If reliable sources are to be believed, the Vatican has a secret plan for India. As part of its global evangelization drive and to demolish the last vestiges of Hindu religion, the Vatican is all set to appoint an Indian as the next Pope. The name being considered to be appointed/ anointed as the next Pope is that of Mar Baselious Cleemis, the 59-year-old Major Archbishop of Syro-Malankara Church (as the Catholic Church is known in Kerala). But what will happen to the present Pope who seems to be healthy? Well, he would be asked to announce his retirement lest he faces the fate of John Paul I, the Pope who reigned for hardly one month in 1978!

Cleemis, who hails from Pathanamthitta district of Kerala, is the front-runner for the post. If elected he would be the first Asian to become the spiritual head of the global Catholic community. It may sound bizarre to some as the idea of a coloured Cardinal occupying the top post in the Vatican was unthinkable even in early 2000 itself.

The Vatican, ably supported by the Central Intelligence Agency and the Italian Mafia has a hidden agenda behind the elevation of an Indian as the next Pope. Once you have a desi Pope, it would be easy for the Church to go for massive conversion and make India a Christian Republic. This is the pattern followed by the Vatican since 1978 when the then Pope John Paul I was found dead under mysterious conditions in the papal quarters. The reason behind the death of the last Italian Pope continues to remain a mystery even after four decades. No autopsy was held and the dead pope was interred at the earliest. Much has been written about the death of John Paul I (original lame Albino Luciani) but Team PGurus is focussing more on the current issues at hand.

The Cold War between the USA and the USSR was at its peak in 1978. The USA badly wanted to demolish the Communist rule in Europe. The CIA Station Chief of Rome was the first international figure to land in the Vatican once it announced the death of John Paul 1. He was joined by Umbert Ortolani, a businessman notorious for shady deals he executed for and on behalf of the powers that be at the Vatican and the Catholic Church in Europe, USA, and Latin America.

The agenda was to get a person who could play a major role in demolishing the Communist structure in Europe and Asia. They zeroed on in Karol Josef Wojtyla, the 58-year old cardinal born in Poland. Wojtyla turned out to be the Trojan Horse who walked away with the honors supported by the Vatican and the CIA. He was coronated as John Paul II. The Polish-born Pope did not disappoint his mentors. He ensured that Communism came down like a pack of cards as he effectively mobilized the discontentment among the population in Communist countries against the party apparatchiks.

The first country to get rid of Communism once and forever was Poland. The other East European countries followed suit which culminated in the disintegration, destruction, and demolition of the Union of Soviet Socialist Republic (USSR), the largest country in the comity of nations till 1991.

What the Vatican, the CIA, and the Italian Mafia think together is that India is a gold mine where they can convert, proselytize and evangelize without difficulty. The Vatican has its own daughter as the signora of the Indian National Congress. Laws in India are conducive and favorable for religious conversion. If there is an Indian to head the massive conversion drive planned by the Vatican, there is no need to worry about anything. The target of Vatican is the “unreached populace” in States like Uttar Pradesh, Madhya Pradesh, Bihar, Rajasthan, Gujarat, Bengal, Uttarakhand, Jharkhand, and Chhattisgarh.

Who is going to be the India-born Pontiff from the Catholic religion? The Pope enjoys the status of a head of State as the Vatican is treated as a country by the comity of nations. The Indian Pope would enjoy the status of a head of the State and can interfere in any affairs of the country. Respected readers, do you know that all Catholic bishops, archbishops, cardinals and cardinal majors in India are appointed by the Pope? Do you know that all the Churches, Church-run educational institutions, hospitals, seminaries, nunneries and all Church-sponsored establishments in India are owned by the Pope? That is the truth. Team PGurus was taken aback when the Vatican accorded the status of an international pilgrim center to the St Thomas Church at Malayattoor in Kerala. It is for either the government of India or the Government of Kerala to announce such a declaration. But this announcement was made by the Pope because he is the proprietor cum owner of St Thomas Church and the hundreds of acres of forest land surrounding the Church. This is the case with all such establishments in India. The information was provided by late Prof Joseph Pulikkunnel, a professor of English-turned-scholar in Christian studies. “The person nominated/ appointed by the Pope runs, administers and controls the institution, whether it is a Church or hospital or educational institution or seminaries,” Prof Pulikkunnel had told us.

Coming back to the present scenario, the Vatican, which has considerable influence in all the governments across the world, feels that India is the right place to evangelize. An Indian Pope would make people in millions attracted to the Catholic Church. Why did the Vatican choose Karol Josef Wojtyla as Pope in 1978? They wanted a person who spoke the same language as that of the Polish people to demolish Communism in Poland. The same is the case bring followed here.

If you feel these facts are unsubstantiated doubts and suspicions, please read POLICHEZHUTHU, the Malayalam autobiography of Kunhananthan Nair, popularly known as Berlin Kunhananthan Nair. He is a hard-core CPI-M journalist and was the European correspondent of the now-defunct Blitz (edited and owned by the colorful Russi Karanjia) for more than five decades. Nair was based in Berlin, the capital city of East Germany, and hence the sobriquet to his name.

Nair was one of the first journalists to land in the Vatican following the unexpected death of John Paul I in 1978 and that too 33 days after his election as the Pope. “John Paul I was in good health and spirits and had no record of any heart ailments. The death of the Pope was termed as the Sacred Murder in Vatican. There was no autopsy or post-mortem of the body and hence the reasons for the death would remain a mystery for decades to come. I collected details which pointed out that the Pope was bumped off by a professional assassin deployed by the Italian Mafia because they never wanted the world to know the rotten secrets of Vatican. The secrets were about the private lives of the Cardinals, major cardinals, and the high power officials in the Catholic Church and also about their not so sacred dealings with the mafia, drug syndicate, and even large-scale prostitution,” said Nair.

He said that Karanjia, who stood like a rock for media freedom and freedom of expression was threatened by the Church forcing him to discontinue Nair’s sensational and sensitive despatches from Rome. Most of the information he collected had been incorporated in the book POLICHEZHUTHU.

What makes Mar Baselious Cleemis the hot favorite for the post of Pope? Cleemis, whose original name is Issac Thottumkal, has all the qualities to be the next shepherd of the Catholic Church. He is known for his virulent dislike for Hindus. Immediately after the swearing-in of Narendra Modi as Prime Minister in May 2014, Issac Thottumkal, who was the then president of the Catholic Bishop’s Council of India, went around the country alleging Christians in India were not safe under the reign of Prime Minister Modi. This was widely reported in the international media and our Issac Thottumkal became a media celebrity like John Dayal, another globetrotter conjuring tales of atrocities to anyone would listen.

Since then Mar Cleemis is being seen as a saviour by Vatican which feels he can convert India into a Christian Republic once he is ordained as Pope. The CIA and Vatican have chartered a long-term plan in the 1950s itself for the division of India. Titled “Operation Brahmaputra”, they have a well-designed plan to create a Christian Republic in North East India by making the seven North East India States (Arunachal Pradesh, Nagaland, Mizoram, Meghalaya, Tripura, Assam, and Manipur) to secede from the subcontinent. If you have any doubts, please refer to the religious demography of these states.

Mar Cleemis has established strong links with the CPI-M since the last Lok Sabha election. Sitaram Yechry is a regular visitor to the palace of Cleemis in Ernakulam and Thiruvananthapuram and was seen kissing his hands. The CPI-M, which had opposed the Church way back in the 1950s and 1960s have cozied up to the Holy Fathers since then. Both the Marxists and the Methrans (Malayalam for Bishops) know well that they would not be able to conquer India so long as the Hindu religion thrives. Hence the Church-Communist axis to demolish Hinduism, Hindutva, and Hindu culture. 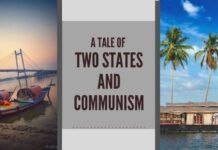 A tale of two states and Communism 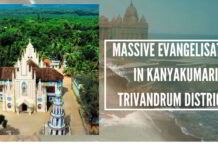 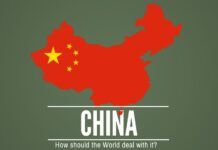 Rise of Undemocratic China: What The World Should Do

Jammu, Kashmir and Ladakh to enter new era on October 31